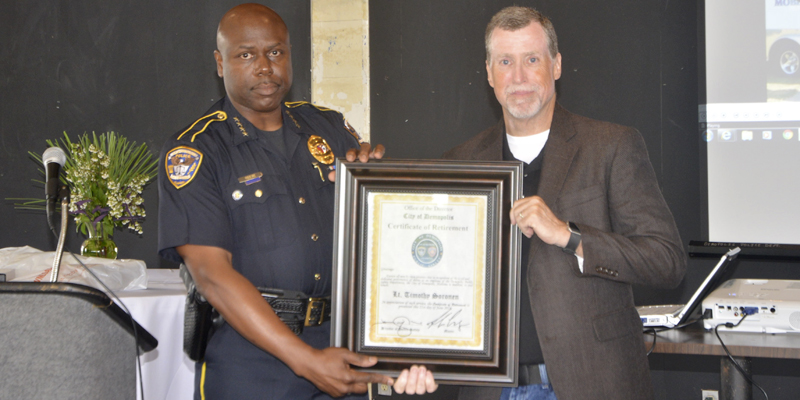 Friends and family of retired Lt. Tim Soronen gathered together on Thursday at a lunch banquet to celebrate his long career in law enforcement.

“He’s made some friends, and he’s made some enemies. He brought closure to a lot of cases [in which] a family was victimized by crime, and he brought some justice to people who did wrong. Thank you for what you have done for law enforcement and for the city, and we want to celebrate you,” he said.

“You are without a doubt one of the better investigators I’ve ever worked with.”

“Whenever Tim got on the stand, I always wanted to watch him, because I learned a lot by just watching Tim and the way he did things.”

Mayor pro-tem Charles Jones shared two personal stories in which he witnessed Soronen’s skill as an investigator. The first is when Jones had a break-in on his property, and he installed a game camera to catch the thief, but he and others who were helping him had trouble making out the picture.

“Tim walked into the room, said ‘you mean, y’all can’t tell that’s so-and-so?’, and he walks out of the room.”

The second story is when Jones’ had trouble with snacks and snack money being stolen from his students. Jones requested Soronen’s help with deterring the kids, and Soronen was able to get the student behind the stealing to confess with little effort.

Soronen also received a plaque, a shadow box filled with his badges, medallions and other insignias that he wore throughout the years, a retirement badge, his handgun which was repainted brown to distinguish it from an active duty police officer’s guns and a certificate of retirement from the Demopolis Police Department.

Soronen gave the banquet’s final speech in which he told the crowd why he loved his job. He said he enjoyed being able to help people and never having the same day twice, and he looked forward to every day at work.

“The best thing in the world to me was always to try to get to the bottom of a situation and help the victims along the way.”

Before leaving the podium, he thanked Griggers, the Demopolis City Council, Reese, his coworkers at the police station and the fire station, his friends and his family.

Soronen then ended his speech and returned to his family as the room erupted into applause and a standing ovation as a final ‘thank you’ for all his years of serving the community.

(This article originally appeared in the Saturday, June 20 issue of the Demopolis Times.)