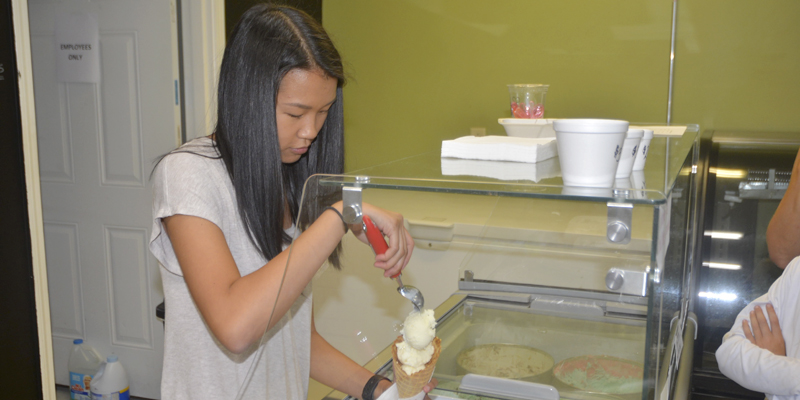 The ice cream can be outfitted with different types of cones and toppings or made into a banana split, a sundae or a milkshake.

Amanda Hall, who has worked at The Mustard Seed for 15 years, said talks of adding cool refreshers began about a month ago but were originally small ideas.

“We actually just started with very small thinking we just wanted to do shaved ice,” she said.

From there, the idea blossomed into the ice cream bar that it has become.

The ice cream is from the Mobile creamery Cammie’s Old Dutch Ice Cream Shoppe. With 47 total flavors available, there will be plenty to choose from when it comes time to rotate the flavors.

Hall said customers can expect to see flavors such as cookie dough, creole praline and brownie grace the ice cream bar, as well as pumpkin spice and peppermint as seasonal flavors. Chocolate, vanilla and strawberry, however, are here to stay per Old Dutch creamery owner Cammie Wayne’s recommendation.

“She hit the nail on the head. We’ve done more chocolate than anything,” Hall said.

There are also plans to sell half-gallons and pints of ice cream and to start dipping the ice cream cones in chocolate and sprinkles.

According to Hall, the cold treats have received a warm welcome.

“It has been so positive … It’s been a lot of fun to see children come in,” Hall said. “It really does make the day go by really fast,” she added about the children’s enthusiasm for the ice cream.

Among the children, the favorites seem to be cotton candy, cookie monster and birthday cake, while adults tend to prefer pistachio almond, butter pecan and salted caramel.

Sasser Braswell, 12, stopped by with some family and friends and said everyone was talking about the ice cream bar and that she planned on “coming back for sure.”

“I feel very excited because we don’t have an ice cream shop anywhere.”

(This article originally appeared in the Saturday, June 20 issue of the Demopolis Times.)