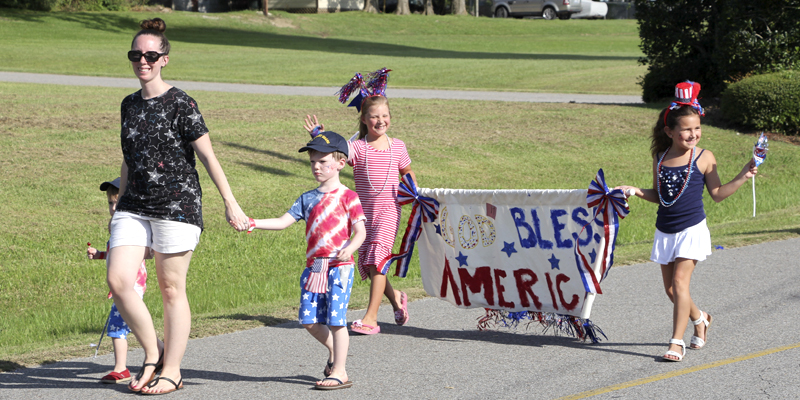 The annual Freedom on the River Children’s Parade gives kids a chance to be creative and show their patriotism. The event will begin at 5 p.m. with participants needing to be registered no later than 4:45 p.m.

The week of the Independence Day holiday brings two traditional events to the City of Demopolis as the annual Freedom on the River event takes place as well as this year’s sixth annual Hwy. 80 Songwriter’s Festival on Saturday, July 7.

On Wednesday, July 4, the Demopolis Area Chamber of Commerce and the City of Demopolis will host Freedom on the River at the City Landing and George Franks Field.

The event begins at 4 p.m. with a variety of activities and live music. Wristbands for unlimited water and dry slide inflatables will be sold for $5 from 4 p.m. to dusk. One of the traditional activities — the Children’s Patriotic Parade — will begin at 5 p.m. The parade encourages children of all ages to decorate their own transportation — such as wagons, strollers, skateboards, and bicycles — in red, white and blue for a parade from George Franks Field to the Demopolis City Landing. Prizes will be awarded for the most festive and creative entries in different age groups. The parade is free for all children, simply arrive at George Franks Field and be registered no later than 4:45 p.m. 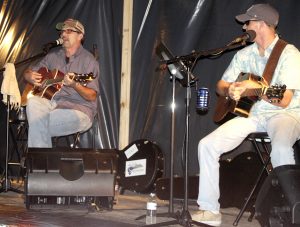 Jacob Broussard, left, and Taylor Craven perform together during a set at last year’s Hwy. 80 Songwriter’s Festival. Craven is returning to this year’s festival to be held July 7.

The grand finale is the fireworks show over the Tombigbee River, which will begin at dark. The fireworks display is the largest in the area and is sponsored by the City of Demopolis.

Freedom on the River is free to attend. There will be food and drink vendors.

The second event of the week is the annual Hwy. 80 Songwriter’s Festival to be held Saturday, July 7, from 6 to 9 p.m. on the downtown square.

Nine performers will take the stage for this year’s Songwriter’s Festival with performances being divided into three sets with three songwriters featured in each. This year’s songwriters include some familiar names to the festival. Among those set to perform are: Taylor Hunnicut, Ted McVay, Paul Garner, Brandon Paulk, Mike Rogers, Frank Field, Kenny Smitherman, Taylor Craven, and Megan McMillan.

The downtown square is declared an entertainment district for the duration of the event meaning alcoholic beverages will be allowed, only on the downtown square from 6-9 p.m. Guests are also encouraged to bring chairs. In the event of rain, the event will be moved to the Demopolis Civic Center. Food and t-shirt vendors will be on hand.

(This article originally appeared in the Saturday, June 30 issue of the Demopolis Times.)