With the official retirement of longtime administrator Arthur Evans, a new CEO and administrator, Doug Brewer, has taken the reins at Bryan W. Whitfield Memorial Hospital.

Brewer is a native of Choctaw, Oklahoma, having earned an undergraduate degree at the University of Central Oklahoma followed by a master’s degree fro Kutztown University in Pennsylvania. 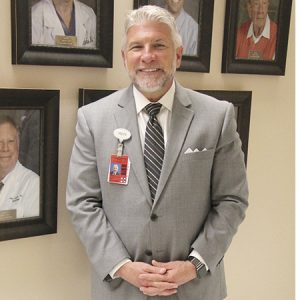 Upon earning his bachelor’s degree, Brewer went to work for the governor in Oklahoma, handling about 30 state agencies. That job led to another with a defense contractor. Following that, Brewer had the opportunity to join a company that built rehabilitation centers and began his own management business for healthcare facilities. In 2000, he entered the operations side of healthcare and has been there ever since.

“I sold my company and went into acute care hospitals,” he said.

Over the years, Brewer worked for Tenet Healthcare, one of the largest owners of hospitals in the country, and in 2007 joined SSM Health, a Catholic healthcare system.

“It was at SSM that I really got into the quality of care provided by hospitals. It was very important at SSM and it ignited in me a passion for quality and safety,” he said.

Brewer said he looks to bring that same high standard of quality care to BWWMH. He points to three key issues in meeting a higher standard: Clinical Quality, Patient Safety, and Patient Satisfaction.

“The federal government monitors our clinical quality and it is driven by processes,” he said. “We need to ensure our hospital has the processes in place that deliver quality over long periods of time.”

Brewer said the local hospital has a good foundation in clinical quality, having received a 3 out of a possible 4 stars in the Medicare rating system.

“A three is very good for a community hospital,” he said.

He said the key to improving Patient Safety is being engaged as a staff and workplace culture.

“If our processes were to break down, we have to have employees who will stop the line and say, ‘something isn’t right’,” he said.

Brewer plans to recognize employees for patient safety through a program he calls “Polished Stones.”

“Those who stop the line to ensure things are being done correctly deserve recognition. Doing things the right way will help our patients throughout their stay and the quicker we can get them home the better,” Brewer said.

“I don’t like using that phrase because it is so much less than what we do.

“When we visit McDonalds’s we don’t necessarily remember the service we receive. But, when my dad was dying at Mercy Hospital in Arkansas, I remember everything. That’s what we do — we see people at the best and worst times of their lives. The stakes are high and you never forget it, good or bad. We only have one chance.

“We have to take a minute and show we care. Often, it is the little things that matter … a little bit can change the day for our patients and their families.”

Another area that Brewer wants to improve is transparency.

“I want to make information available so that people can talk about it and talk about meaningful things. We want people to know the good things and we want to work on those things we need to improve,” he said.

As an example, he said BWWMH has had no surgical site infections for three years.

“That is excellent. If I have appendicitis, I want to come here. Having no infections over that period of time is really saying something,” Brewer said.

As for areas to improve, Brewer said overall patient satisfaction, which is determined through Medicare-provided surveys, is a good place to start.

“We want people to know we are not where we want to be in customer satisfaction,” he said. “My goal is to see the hospital reach the top 20 percent in that area and I believe it can happen … we have to focus on it.”

Brewer is married to Heidi Brewer and they have grown twin sons, one living in San Francisco and the other in Oklahoma.

He said he looks forward to settling into his new position and a new home in Demopolis.

“Working in small hospitals is what I love. One of the things that attracted me here is the quality of the school system and that is a must in recruiting physicians. The community leaders’ support is also unbelievable and that made it an attractive position. This community is tailor-made for a small hospital to be successful,” Brewer said.