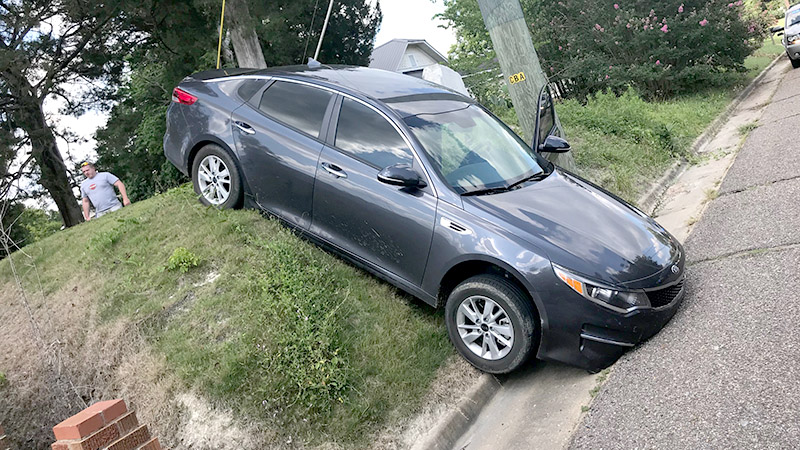 The pursuit of a vehicle Friday night ends when the driver's attempt to jump a hill fell short.

An attempt to pull over a speeding vehicle turned into a pursuit through Demopolis Friday, ending with the suspect crashing his vehicle.

According to Demopolis Public Safety Director Tommie Reese, on Friday  evening, Demopolis Police Officer Joshua Ochiltree attempted to stop a blue Kia sedan for speeding while traveling north on Jefferson Road. The vehicle did not stop, instead turning east on to Highway 80. The driver then did a u-turn in front of the Red Barn restaurant and then traveled north on Front, to Jefferson Street, then to Jackson Street.

At that point, the driver turned on West Prout, which is a dead in street. At end of Prout, the suspect continued off the road, through a chain link fence, and attempted to jump a hill and land on West Pettus Street. When the vehicle jumped the hill it landed on the nose of the vehicle and was not able to continue.

The driver of the vehicle then exited and attempted to elude police on foot. Officials said he was quickly apprehended under a residence on Pettus where he was taken into custody.

The driver is identified as Lazarus Cornell Mitchell of Demopolis. He was arrested and charged with driving under the influence, resisting arrest, attempting to elude, criminal mischief and several traffic violations. Mitchell also has outstanding warrants in Demopolis, Linden and Hale County. He was processed and transported to the Marengo County Jail.