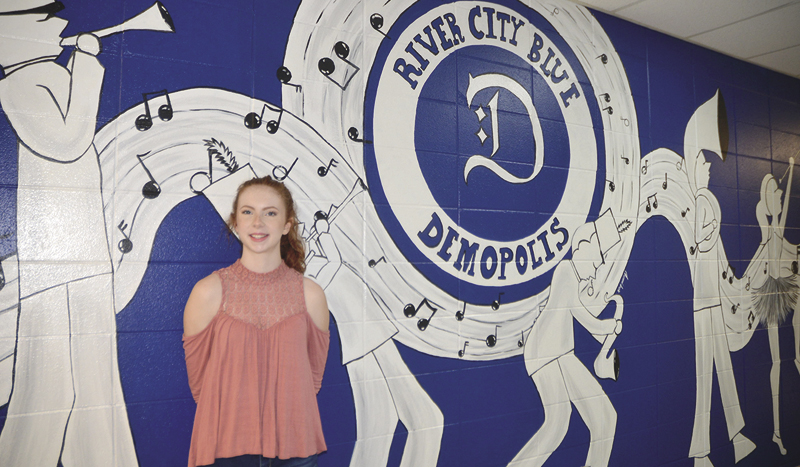 A new mural is decorating the wall outside of the Demopolis High School band room and showcases the “essence” of the River City Blue.

Senior Abby Hulsey was tasked with the 30-by-8 foot mural in December 2017 and went through several different versions before settling on what was painted.

“It just slowly morphed into what it is now,” she said.

After months of designing and redesigning, Hulsey was ready to start painting in June. First, she sketched everything on the wall, which took almost a full day of work. Then, over the next two weeks, she painted.

One of the challenges of the mural was the brick wall that it was painted on. When Hulsey outlined in black, she had to be extra careful painting the grooves of the wall in order to keep the outlines smooth.

“I just wanted to capture us as a marching band.”

The mural features the band’s new logo in the center, music notes flowing through the air and a marching band moving across the wall.

On the opposite wall will be a “Band Walk of Fame” featuring awards, the band’s creed, new trophy cases and more to remind band members of past successes.

Director of Bands Demetrius Scott said the new logo and mural is part of the redesign of the River City Blue, which also includes new uniforms and props.

“This will be one of the first times everything on the field is going to be brand new,” he said.

According to Hulsey, the mural is well over the scale of her normal art, which usually includes watercolors and detailed work.

However, the newness of the project was lost on Scott, who said he grew more and more amazed with the mural as it neared completion.

“I think it’s something that’s just going to stick out for the school.”

Hulsey’s mural will have its big reveal at the start of band camp on July 12 and, along with the rest of the redesign, will set the tone for the River City Blue moving forward.

(This article originally appeared in the Wednesday, July 4 issue of the Demopolis Times.)