The Alabama Historical Commission and Alabama Trust for Historic Preservation has listed the Old Hale County Jail among its “Places in Peril.”

Over the years the listing has featured bridges, caves, antebellum houses, and other structures that represent the history of Alabama. Places in Peril has elevated many historic places around the state, bringing preservation into the spotlight and showing us how important it is to save Alabama’s history. 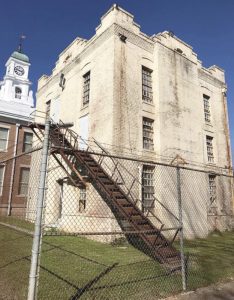 The Alabama Historical Commission and Alabama Trust for Historic Preservation has named the Old Hale County Jail among a list of “Places in Peril.” The jail is of historic significance due to its architectural style as well as its construction in 1908 at a time of social conscious prison reform, moving from large labor campsto prison farms and county/city jails.

This year, these places represent the everyday lives of everyday people. They are all public spaces that played a part in the social, religious, economic, and legal lives of Alabamians across the years. Unfortunately, they all now stand threatened by vacancy and disrepair. Each building has its community behind it fighting to bring these buildings back from the brink and put them back into use again as educational and community spaces. Sound planning and a unified community effort can bring these buildings to a certain point, but public awareness can also provide options and resources from across the state.

Located behind the neoclassical, historic Hale County Courthouse, the Old Hale County Jail served Hale County from its completion in 1908 until 1999, when it was replaced by the modern Hale County Corrections facility. The masonry building is distinct with its 24 large windows inset with iron bars, and its crenelated battlements. The jail was constructed during a period of socially conscious prison reform. During the nineteenth century, large convict labor camps were commonplace, but around the turn of the twentieth century prison farms and county and city jails began taking their place. The jail is three stories with offices on the first floor and holding cells on the second and third. The second and third floors were each divided into two separate cells. The jail could hold up to 71 inmates, but on average held 42.

The jail is owned by the Hale County Commission and sits vacant. The primary threat is vacancy and decay, leaving the building to the possibility of demolition. The building is under the purview of the probate judge in Hale County, Arthur Crawford, Jr., a sponsor of the PIP nomination. There are several structural issues that need to be addressed, including a damaged roof. A thorough Historic Structures Report would help to identify key weaknesses in the building’s structural elements and consider rehabilitation plans. The building is listed as a contributing building in the Greensboro National Register district. Two private individuals, including Judge Crawford, as well as the Greensboro Area Business and Tourism Association are sponsoring the nomination. This group has the necessary decision-making power and organization to capitalize on the publicity provided by the listing and possibly other opportunities that come from listing.

For more information on the Old Hale County Jail contact Ashley Dumas at  205-652-3830 or by email at adumas@uwa.edu.

For more information at Places in Peril contact alabamatrust@athp.org or call 205-652-3497.

(This article originally appeared in the Wednesday, July 4 issue of the Demopolis Times.)