Windham received a plaque from the membership thanking him for his many achievements as the president of the group. 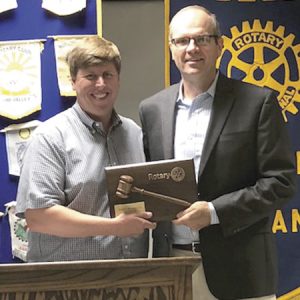 “Through (Windham’s) leadership, the club is closer to realizing a longterm goal of constructing a splash pad for our city,” said Hunter Compton, who will serve as the club’s 2018-19 club president.

During Windham’s tenure, the Rotary Club also reached new highs in the donation of money and canned food to the Demopolis Food Pantry, maxed out attendance at the annual golf tournament with proceeds used to fund charitable contributions to Camp ASCCA and Demopolis area organizations, received special recognition for contributions to Camp ASCCA for the clubs many years of giving, encouraged further club teamwork, building a feeling of Rotary family through a popular spouse’s night and Christmas party, arranged a tour for the club of the new Two Rivers Lumber Company, had a great year in club attendance and involvement in the community.

“Jason did so many things – all with a smile and friendly handshake. He epitomizes the Rotary motto of ‘Service Above Self,’” Compton said.

(This article originally appeared in the Saturday, July 7 issue of the Demopolis Times.)