Dewoyne Charleston will participate in Under Armour’s Baseball Factory National World Series from July 17-21. He was selected during tryouts in early June out of 40 other players in the 14-15 age range.

The Linden High School Freshman will experience both a camp where he will grow his skills as a baseball player and competitions against other teams comprised of players from all over the world during the Baseball Factory World Series. 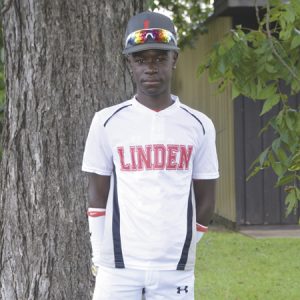 Charleston competed against 40 other boys in his age group for his spot in the Baseball Factory World Series.

Charleston’s love for baseball began when he was just three years old playing tee ball in Linden’s Cal Ripken league. He has played in the league every year for the past 11 years, which led to his invitation to try out for the Baseball Factory. He plays shortstop and second base.

“I play a lot of other sports, but that one — that’s the one for me,” Charleston said.

He prepared himself for the tryouts by practicing batting, fielding and accuracy, but Charleston’s strategy was more than just practicing. He also focused on mentally preparing himself so nerves didn’t get the best of him when it came time to tryout.

During tryouts, Charleston’s throwing speed, grip strength, batting and fielding were all tested.

Charleston said both the competition and the camp will serve to improve his skills and get him closer to his dreams of playing Major League Baseball.

“It’ll help me to improve my game to where I’m draft-worthy when I start playing in college.”

Charleston’s father, Dewayne, said he was very excited for his son to be able to participate in such an opportunity.

“We thank God that God allowed him to get the opportunity to do it, so we’re trying to push him to be able to go and do what he can do. [It’s] what he loves to do.”

Charleston said he has felt his family’s support for his passion since he was three years old.

“They believed in me since I started. They’re going to believe in me until I stop.”

But all this opportunity is not without a cost, and Charleston has been working hard to fundraise the $3,400 that he needs to participate.

Charleston is the son of Dewayne and Lablinka Charleston. To donate to support Charleston, contact 334-654-0695 or dewayne9626@gmail.com

(This article originally appeared in the Wednesday, July 11 issue of the Demopolis Times.)