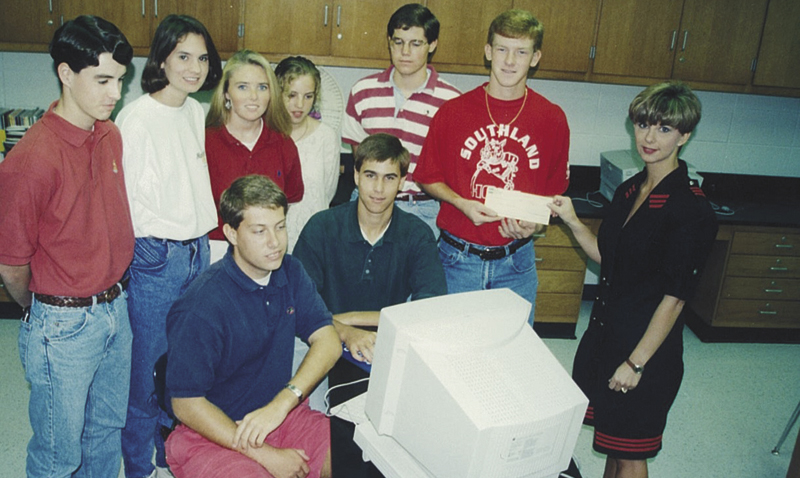 Demopolis High School students in the late ‘90’s pose with a computer that was purchased with a grant awarded by the Demopolis City Schools Foundation.

DCSF has been a source of grants for years

For 25 years, the Demopolis City Schools Foundation has had one purpose: to serve the students of Demopolis. With that mission in mind, they have been awarding grants and funding opportuni-ties and ideas for the students and teachers in Demopolis in all grades since its inception.

“That’s a good, solid generation and a half of people that have really benefited from the work that we’ve done,” Executive Director Amanda Barnes said.

The DCSF was created in 1993 when the new high school was being built. Alabama Power made a seed fund available, and the fundraising forces behind the new school kept going, eventually lead-ing to today’s grant funds totaling over one million dollars, plus the $1.2 million endowment kept separate from the grants fund. Ninety percent of funds comes directly from Demopolis businesses and community members.

This past school year, the DCSF awarded more grant money that ever, coming up to $72,000 — a sharp contrast between the $11,000 that was awarded in the foundation’s first year. The average grant in the first year was around $650. Today the average amount is $2500.

According to Barnes, the almost $2,000 increase in average grant size has been the biggest change since the DCSF’s first year.

“I don’t see a lot of teachers these days asking for small grants, so maybe they have more class-room funds available to them or maybe things are available through the school system,” she said.

What hasn’t changed, however, is what has been the most common grant written.

Barnes said that library books and new technology have been consistently asked for during the past 25 years, though the days of teachers writing grants for polaroid film and overhead projectors have passed.

“You can go back and look at some of the grants that have been given and in some ways they’re still the same. Libraries still need books. Computers in whatever iteration they’re in are still a nec-essary tool,” she said.

While new technology and teaching techniques are to be expected, some grants, like for drones or a reading method that uses Legos, were not imagined by anyone on the board.

“Can you imagine 25 years ago that you’d have fifth graders programming flying drones? I mean that’s like science fiction,” Barnes said.

The opportunities afforded to students of Demopolis don’t come from nothing. Barnes pins the success of the DSCF on the community members who support the foundation through the mem-bership program year after year.

Of course, success doesn’t come without challenges. According to Barnes, staying true to an or-ganization’s original mission and not be “lured away by new and shiny ideas” is harder than it seems, but it’s not nearly the most difficult part of the job.

“When you have to tell a teacher she didn’t get a grant is one of the most disappointing things. That’s the hardest part of this job.”

Barnes said she does her best to keep encouraging the teachers to apply for grants, even when they haven’t been awarded any. Without the teachers writing these grants, the education of Demopolis students would be very different.

“I just think there are experiences and items that our kids wouldn’t ever have. Our kids would not know how to program robots … They would not have access to technology like they do,” Barnes said.

Barnes is thankful for the school system and donors who enable the DCSF to fulfill its purpose. She said that while the foundation serves the students and teachers in Demopolis, the support from the community is what drives the DCSF and the school system forward.

Demopolis High School students in the late ‘90’s pose with a computer that was purchased with a grant awarded by the Demopolis City Schools Foundation.