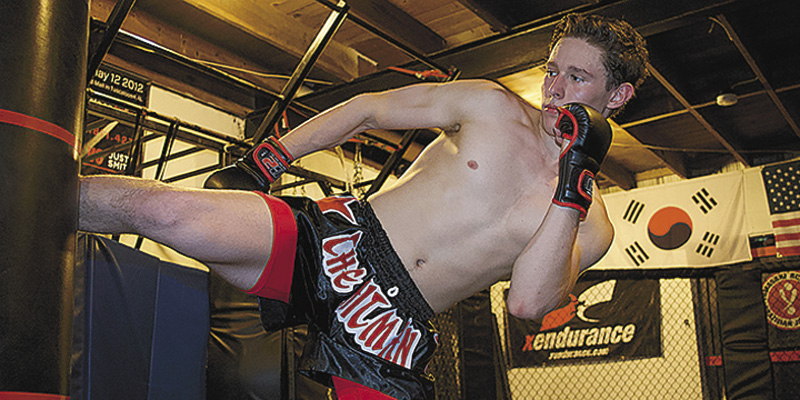 Schroeder’s match on July 28 will be his MMA debut. At 16, he is the youngest sanctioned fighter in Alabama.

If anyone was ever truly born to do anything, Brett Schroeder was.

“I started Taekwondo when I was four years old,” Schroeder says, “and jiu jitsu when I was 10. Ever since I was 11, I was training as hard as I could because my main goal was always to do MMA and be a champion one day.”

For most 16-year-old boys, any time not assigned to school work is spent pursuing the three Gs: girls, gas money and, somehow, getting them both.

Schroeder certainly shares those interests but in the lead up to his fight July 28, several extra Gs — grappling, ground and pound and the pursuit of glory — have climbed the priority list.

He spends upwards of three hours every day doing some combination of weights, conditioning, sparring and grappling, yet Schroeder still finds time to balance his inner warrior with his outer teenager.

“If it’s important to you, you’ll make time for it,” he says. “I hang out with my friends on the weekends, and I have a beautiful girlfriend. Fighting is something I love to do, but you can make time for it all.”

The irony of Brett Schroeder is that when he’s not preparing to kick and punch other people in a metal cage, he’s one of the most mild-mannered and respectful kids you’d ever meet. Always quick with a firm handshake, a “yes sir” and a “thank you,” he’s also a fixture as an instructor at his family-owned Ross Martial Arts, often helping teach classes with students barely older than he was when he first knotted his white belt.

“The thing about the kids is that I really relate to them,” says Schroeder, who is mostly known as Coach Brett on the mat. “They’re doing martial arts at a young age like I was. I love helping people get better at their art.”

But Coach Brett will have to stay in Demopolis when Team Ross travels to Zamora Shrine in Irondale for the fight. When Schroeder steps into the octagon at Strikehard 50, it will be time for Brett “The Hitman” Schroeder to make his presence known.

Schroeder and his opponent, Birmingham’s Nathan Roberts, are not unfamiliar with one another, having fought once in a hotly contested kickboxing match that Schroeder won by decision last July.

But their rematch will have an element of surprise for both fighters. In their last match, fought exclusively from a standing position, Schroeder – a multi-level champion blue belt in BJJ – wasn’t able to utilize those skills. Similarly, Roberts – a state champion wrestler – wasn’t able to lean on that.

“I feel like I have great striking ability, but I am equally as good on the ground,” says Schroeder, who has been training with wrestlers, MMA fighters, kickboxers, BJJ practitioners and traditional boxers in his camp. “When you go in to a fight, things happen. It could be a kickboxing match or a wrestling match. It’s just about adapting and overcoming.”

In preparation for potentially being dragged into a wrestling match, Schroeder’s camp has paid particular attention to takedown defense.

“The jiu jitsu specialty is really sweeps and submissions,” he says. “Wrestlers tend to be a little better at takedowns. As far as preparation for the fight, it’s similar to training for a jiu jitsu fighter except they’ll be going for a takedown most of the time, and that’s not a problem.”

Bragging rights in a budding rivalry aside, the upcoming rematch will almost certainly be for fun. As amateurs — win, lose or draw — neither fighter will be getting paid.

“Everybody has to start somewhere and build your way up,” Schroeder says. “I love fighting, so it’s not really a problem if I step away with anything or not. It’s not really important to me that I’m not getting paid. My goal is to one day to be UFC world champion in whatever weight class I fall in.”

Tickets for the fight are on sale at Ross Martial Arts as are Brett “The Hitman” Schroeder t-shirts, which the team is using as a fundraiser for expenses associated with licensing and pre-fight testing.

(This article originally appeared in the Wednesday, July 11 issue of the Demopolis Times.)