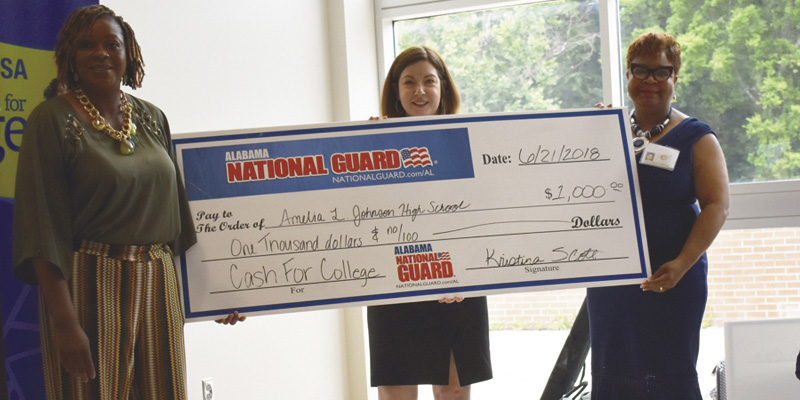 Amelia L. Johnson received a $1,000 award honoring their 92 percent FAFSA completion rate among students. ALJ was among six schools out of 300 chosen for the award.

Alabama Possible, a statewide nonprofit that removes barriers to prosperity, recently presented six high schools with awards ranging from $500 to $1,000 for achievements related to the Free Application for Federal Student Aid (FAFSA).

Amelia L. Johnson High School received an award of $1,000 for highest FAFSA completion rate with a rate of 92.86 percent.

Amelia L. Johnson is a participant in the Cash for College Alabama campaign, which is managed by Alabama Possible. Through the campaign, Alabama Possible teams up with school counselors, career coaches and other educators at high schools across the state to promote completion of the FAFSA.

“It is so important to recognize the achievements of hard-working educators building a college-going culture,” said Kristina Scott, executive director of Alabama Possible. “Alabama’s high schools rose to the challenge this year as evident by Alabama’s achievements at the national level for one of the largest increases in FAFSA completion in the country. We are so proud of their efforts.”

More than 300 schools in 65 counties participate in the Cash for College campaign. In total, the students at these schools have completed over 22,000 FAFSAs in the 2017-2018 school year, resulting in the fourth highest increase in FAFSA completions in the country.

Any student seeking federal or state financial aid – including grants, loans, and work-study programs – must complete the FAFSA. Many students will qualify for Pell Grants of up to $6,095 per year. Students can use Pell Grants for two-year and four-year technical and academic programs. If you want to learn more about the FAFSA and Cash for College, visit cashforcollegealabama.org.

Cash for College Alabama is a partnership of Alabama Possible, the Alabama State Department of Education, Bold Goals Coalition of Central Alabama, and the Alabama Media Group.