On Friday, the Demopolis Public Library bid farewell to Director Morgan Allen, who joined in 2007.

Allen said a major highlight her 11 years as director has been adding eBooks to the virtual shelves of the library, which she started in 2010 as a way to compete with Amazon and to make the library more accessible. Allen also added the option to reserve and renew library books online for the same reason.

“That’s something that I wanted to do [to make] using the library easier and more accessible together,” she said. 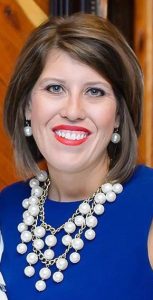 But Allen gives credit where credit is due. She said her library staff also came up with several ideas to bring people into the library, which she was happy to approve.

Allen said that during her time at the library, it not only benefited from supportive staff and board members who were “behind the scenes moving the library forward” but also from the local government.

“It seems like every mayor and city council member has been supportive of the library.”

The city council matched grants and was behind several upkeep projects such as a new roof, air conditioner and elevator. The Public Works Department also improved the library with projects like the addition of a fountain.

Through her career at the library, Allen said she most enjoyed an outreach program in which she would dress up like book characters and do story time as well as Santa’s visits to the library during Christmas time.

She also enjoyed seeing all the new people that came to the library during Kirk Brooker’s painting classes.

Children’s Librarian Kathy Owings is serving as the interim director until one is hired. Allen said the ideal director will embrace library programming and new technology as well as form partnerships in Demopolis.

“I think it’d be best for our library if the person is community-oriented.”

Allen will take up a position at the University Charter School in Livingston as an instructional aid and sixth-grade science teacher. She will also teach STREAM classes for fifth, sixth and seventh graders and be in charge Alabama’s first implementation of Generation Citizen, which provides civics education to students to prepare them to become active citizens.

“I think it’ll be something new and challenging every day,” she said.

Allen will also work on earning a master’s degree in education at the University of West Alabama.

Allen expressed how thankful she was for current and past staff members, Friends of the Library members and past directors who supported her during her time at the library.

“The whole community has made me feel welcome here.”

She also expressed optimism with whatever direction the library takes in the future with the new director due to the staff supporting it.

“The library is in good hands as long as they are here.”

(This article originally appeared in the Wednesday, July 18 issue of the Demopolis Times.)