Working ‘9 to 5’: Canebrake Players to present musical based on hit movie, song 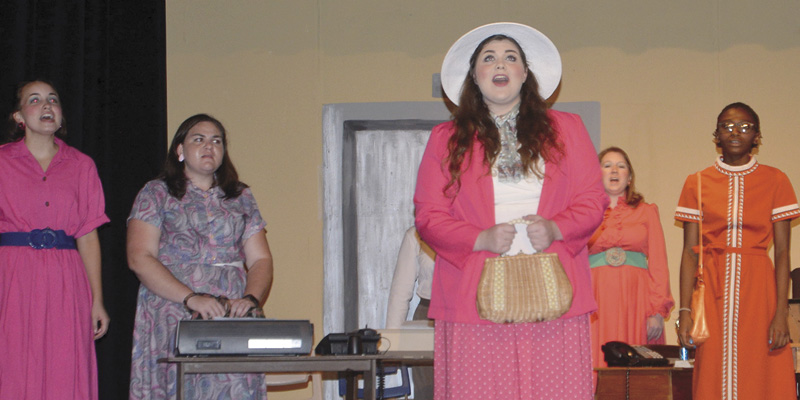 Cathrine Akins (center) as Judy Bernly sings the title song “9 to 5” in the opening sequence of the Canebrake Players’ musical production. Pictured in the back are, from left, Sue Ellen Brousard, Jenna Morgan, Nicole Whittington, and Mary Randall.

With summertime coming to an end, the Canebrake Players are planning to go out with a bang. Their latest production, “9 to 5: The Musical,” will run from July 27-30 at 7 p.m. with the Sunday, July 29 performance beginning at 2 p.m. The play will feature music written by Dolly Parton.

The musical about three working women dealing with their tyrant of a boss was marked with a PG-13 rating for what Director Jody Tartt calls “adult themes and a slight bit of profanity.” 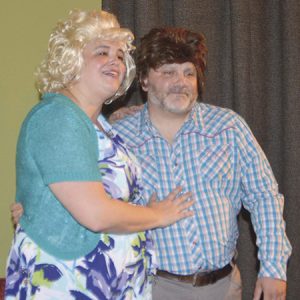 Bridget McClain as Doralee Rhodes sings to her fictional husband, Dwayne Rhodes, who is portrayed by Jody Glosson, in “I Just Might.”

Tartt describes the comedy as not only a humorous take on society’s flaws but also a tale of empowerment that everyone can relate to.

“It’s about these women coming into their own and having confidence in what they can do, and I think that’s a universal thing,” she said.

Though Tartt was already familiar with the play thanks to the television series and movie versions, she researched the music to prepare for her role as director.

“I was real familiar with the storyline but not the music,” she said.

Tartt has had plenty of experience with the Canebrake Players in the past. Not only did she direct a past production of “Oliver,” but several students in the Tiger Arts Guild (TAG), which she operates at Demopolis High School, are Canebrake veterans.

Tartt said an advantage of Canebrake productions is that there are already people filling different roles, such as costume designer, that she would normally have to find someone for or fill herself with TAG.

However, what Tartt enjoys most is the working together with other people who love the arts.

“Theater is such a collaborative art form and you get to meet new friends and experience new talent. It’s just an enjoyable experience when you are with good people,” she said.

She’s also had a few challenges along the way. Working around everyone’s summer schedules, designing the sets for the small stage and editing the show’s accompanying tracks have all been hiccups in the road to opening night.

But, according to Tartt, it’s all been worth it as the show is sure to entertain.

“It’s a really fun show, and it’s a nice way for people to end their summer,” she said.

Tickets are available at the door and are $12 for adults and $8 for students.

(This article originally appeared in the Wednesday, July 25 issue of the Demopolis Times.)