Armistead is the son of the late James and Emogene Armistead of Demopolis and will be remembered by cousins and former classmates in this area. Previously author of “Horses and Mules in the Civil War” (2013) and several articles and essays about the Civil War in periodicals, Armistead, now resident in Escondido, California, is co-author with Robert D. Arconti of Stafford, Virginia, of the new book. 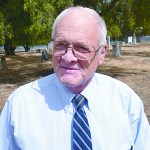 “An Arch Rebel Like Myself: Dan Showalter and the Civil War in California and Texas” is the first biography of a colorful and controversial California legislator. Showalter had immigrated to California during the later gold rush and became a miner along the Merced River in Mariposa County. He represented that county in the State Assembly in 1857 and 1861. During the later session he was a leader of the legislature’s pro-Southern faction but nevertheless was elected the assembly’s speaker pro tem. A dispute with a fellow legislator near the end of the session resulted in the state’s last political duel in which Showalter slew his foe. Afterwards he was involved with a display of a Confederate flag on the streets of the state capital and then gathered a group to cross the western deserts and join Confederates in Texas. Union forces captured his party in November 1862 in northern San Diego County and conveyed them as political prisoners to Fort Yuma, then the nation’s most desolate and hottest post. Released in the early spring of 1862, Showalter made his way across Mexico to Texas and finally joined Confederate forces. After participation in naval battles at Galveston and off Sabine Pass in the Gulf of Mexico, he was commissioned lieutenant colonel of the Confederacy’s Fourth Arizona Cavalry. He led the active battalion of the regiment vs Union forces in the Indian Territory and Arkansas and in pursuit of raiding Commanche Indians in north Texas. In early 1864, the regiment was united in south Texas under Showalter’s command. He led it as the advance force of the famous “Rip” Ford’s retaking of the Rio Grande Valley from Union occupiers. He commanded the Confederate force in the September 1864 First Battle of Palmito Ranch against an artillery-supported, combined force of Union and Mexican Liberal soldiers. He refused to surrender at the war’s conclusion and went into exile at Mazatlan, Mexico. He died there in 1866 at age 36 of a wound received in a drunken saloon brawl.

In an advance review of the manuscript for the book, Dr. Jerry Thompson, Regents Professor of History at Texas A&M International University and a former President of the Texas State Historical Association, termed Armistead’s new book as “ambitious in scope and fascinating in its contents … meticulously researched “ and “a masterful and definitive story.” He concluded that the work will be “likely to keep the reader captivated.” Armistead himself agrees since his subject, Dan Showalter, was such a captivating individual whose life was of the “made for Hollywood” type.

The new book is available from the publisher or via Amazon books.