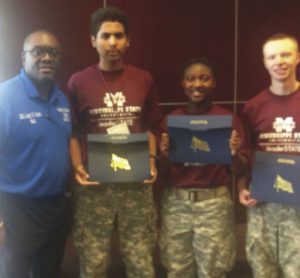 Funded by the U.S. Army and partnered with Mississippi State University, students underwent a five-day STEM camp located on the campus of MSU the week of July 16-20. The camp focused on three areas: the scholar, the athlete, and the leader. The physical fitness involved team building activities, while the academic piece involved STEM. STEM courses are extremely important to the military because of a growing need for potential future recruits that are academically competitive in a global society.

Maxwell George, Janecia Jackson, and Dakota Patterson of the DHS Army JROTC program, attended this year’s camp. The students endured long hours that challenged them both mentally and physically. This is the first time the DHS JROTC program attended a STEM camp.

(This article originally appeared in the Wednesday, August 1 issue of the Demopolis Times.)

Two-year-old killed after being struck by vehicle