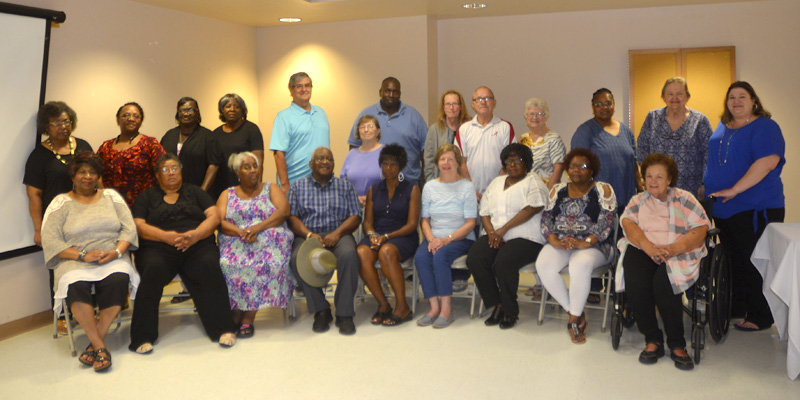 On Friday, July 27, graduates of GROWestAL’s diabetes workshops gathered together at the Bryan W. Whitfield Memorial Hospital’s classroom to celebrate completing all six classes of the workshop. The group of graduates was from three separate workshop periods between March and July.

Demonstrations and hands-on activities were used during each class. Throughout the six classes, attendees learned general information about diabetes, understanding the body with diabetes, complications and how to prevent them, medication, healthy eating and diet, risks and prevention.

As the workshops progressed, Instructor Leigh Autery, RN, added games and visual aids to make the material more engaging. Chair yoga is also demonstrated during one of the classes.

According to her, each class averaged about 20 participants.

There is also a once-monthly diabetes support group held after class to give participants a greater sense of community, answer questions, exchange recipes and help them cope if they or a loved one has diabetes.

Autery said the workshops as a whole are meant to let participants know that they have a support system.

“It just lets them know that we are here as a community hospital.”

The workshops are open to the general public, not just diabetes patients, as a way to increase awareness and understanding of the illness.

Autery said she enjoyed getting to know the attendees on a personal level and that she appreciated the effort they put forth in order to improve their own lives.

“I just really thank them for taking the time to come and do this,” she said.

She also said that many attendees expressed enjoyment and appreciation of their own for the workshops, especially since many did not fully understand the disease.

“They like the class because they have a sense of togetherness, is what they said.”

The workshops are part of the HealthStart Comprehensive Wellness Program and is open to the public free of charge. The next workshop period will start on Aug. 3 at 10 a.m. and will continue every Friday until Aug. 31. Two classes will be held on Aug. 3. Attendees can join at any time but must complete all six classes before graduating.

(This article originally appeared in the Wednesday, August 1 issue of the Demopolis Times.)