Brett “The Hitman” Schroeder, a Demopolis High School Junior and Ross Martial Arts student and assistant trainer, claimed his debut MMA win with a first round Technical Knockout (TKO) in Birmingham on July 28 at Strikehard 50. His fight lasted only 30 seconds.

There was standing room only, with a packed fight card of 14 scheduled fights. Schroeder was scheduled as the eighth fight of night, set to go out just before the title fights. As he warmed up in the blue corner room, he was beaming with excitement. It was time for “The Hitman” to show up. 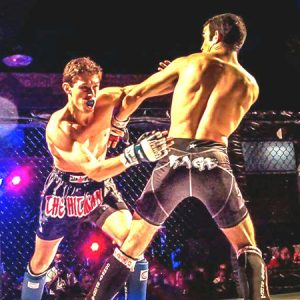 Schroeder had been preparing for the fight with strength, conditioning and drill training and sparring whenever he could.

“It’s about repetitions,” he said about his training.

Schroeder entered the cage and immediately took center stage, rallying the hometown fans that drove nearly two hours to watch him in his first MMA bout. He was matched against a tough Birmingham fighter, Nathan Roberts, who has multiple kickboxing wins as well as a high school wrestling team state championship title.

Schroeder and Roberts fought last year in a very exciting kickboxing match which ultimately resulted in a split decision win for Schroeder.

According to Schroeder, the last fight between the two lasted three rounds, and it was “purely striking.” He also said he made some rookie mistakes, which he sought to rectify before facing Roberts again.

With both fighters wanting a re match, they were set for Alabama’s first-ever sanctioned teen MMA fight.

Schroeder made sure he was calm and alert before stepping into the ring.

“A big thing about fighting is you can’t be nervous, because nervousness means hesitation.”

The referee said “fight” and both fighters exchanged hands. Moving around the ring, Schroeder caught his opponent with a solid overhand right that clearly buckled Roberts’ knees. Schroeder, smelling blood in the water, immediately began storming forward with punches.

Roberts attempted a clinch, but Schroeder took control by delivering a knee to the midsection that sent Roberts scrambling away to recover. Schroeder chased him across the cage and pinned him while delivering a viscous combination of strikes that ultimately forced the referee to intervene, resulting in a TKO win for Schroeder.

“It felt like the best thing in the world,” Schroeder said of his win, knowing that his hard work and dedication had finally paid off.

With this fight behind him, “The Hitman” is already looking for his next tournament, though he’s not exactly sure when or where it will be, only that he’s “definitely going to get in there are soon as possible.”

(This article originally appeared in the Saturday, August 4 issue of the Demopolis Times.)