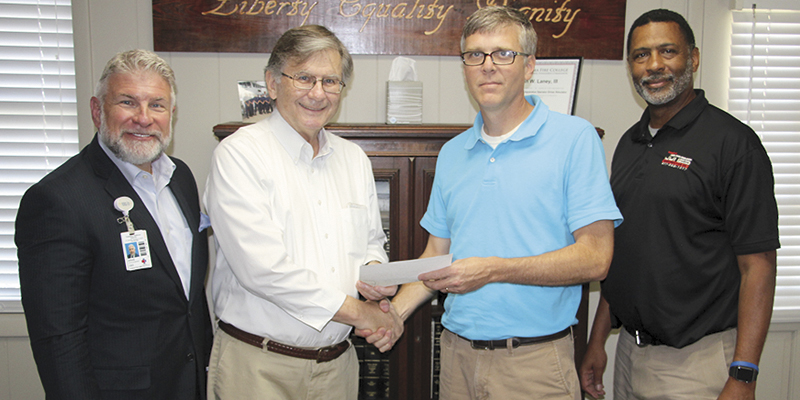 Officials with the City of Demopolis and BWWMH met Monday to finalize an agreement that will provide the hospital with a $1 million loan. Pictured are, from left, BWWMH Administrator and CEO Doug Brewer, Mayor John Laney, THA Board Chairman Rob Fleming, and City Councilman Charles Jones.

Hospital officials approached the city council asking to co-sign on a loan, but the council opted instead to provide a $1 million interest-free loan.

Councilman Charles Jones, who serves as the council liaison to the hospital, said the funds would go a long way in providing “breathing room” as new BWWMH Administrator Doug Brewer settles into his position.

“The hospital is dire to this community and we need to help when we can, and we have in the past,” Jones said.

Mayor John Laney presented the idea to the council to provide the interest-free loan directly rather than co-signing for a loan. The loan was provided for a five-year term.

Hospital officials are also planning to approach the Marengo County Commission regarding co-signing for a loan.

Brewer said the funds would be used to help with operating expenses.

“Rural hospitals across the state are struggling. I feel we have a great hospital, but sometimes we need help. We will make sure this money is put to good use in taking care of those we serve,” Brewer said.

He added that the funds would allow for the hospital to approach UAB providers with the goal of saving money.

“This will allow us to use our money more intelligently, working with new providers to save money on supply costs,” he said. “It will also help in the area of uncompensated care and will go along way to help those without the means to pay.”

Jones added that the funds are being provided with long-term financial goals in mind.

“This is to help us get to a long-term solution,” Jones said.

Tombigbee Healthcare Authority Board Chairman Rob Fleming thanked Jones for his efforts as the council’s liaison to the hospital.

“(Jones) spent a lot of time to understand where we are and how much this help is needed,” Fleming said.

In 2016, the council provided a loan of almost $1 million to the hospital to allow the hospital to move forward with hospital improvements while awaiting funding through a USDA grant. That loan was repaid in 2017.

Other items discussed by the council during its August 2 meeting included:

• a continued discussion on the city’s street sweeper. Public Works Superintendent Barbara Blevins had been asked to obtain information regarding leasing or buying a street sweeper as the current machine is needing repairs. A representative of Ingram Equipment Company provided information regarding a possible lease agreement. No action was taken pending more details.

• approving a purchase for a new circuit board for the fire alarm system at the Higher Education Center. The cost for the board is $5,000.

• declaring as surplus property two 2008 Crown Victoria’s from the police inventory. The vehicles will be donated to the Mt. Vernon Police Deparment.

• declaring a structure at 103 Manson Drive as a public nuisance and approving a bid of $2,100 from the city public work’s department to do the clean-up.

• discussing a possible sales tax increase to help provide funds for schools, the hospital, and street projects. Councilman Jones said he would be in favor of the city proposing a 1 cent sales tax increase being divided by one-third between the three, stating it could be done with a vote of the city council.

Mayor Laney said he felt people should vote on how much they want to provide to schools.

“It is dangerous for six people to make the decision,” he said.

He added that the hospital is regional and that its success “will depend on how much people in the county want it to work.” Laney went on to say that citizens should have the opportunity to voice opinions on “what they want to do to help the hospital.”

While not at the meeting, DCSS Superintendent Kyle Kallhoff has said the school system would need additional revenue before replacing its aging facilities. No action was taken on the matter.

(This article originally appeared in the Saturday, August 11 issue of the Demopolis Times.)