The newly renovated G.P. Austin Head Start and Early Head Start facility in Linden was officially unveiled at an open house event before an excited crowd of parents, community leaders and representatives from the organizations behind the programs and the renovations.

“It’s actually a complete overhaul of the G.P. Austin building,” said Felecia Lucky, who is president of the Black Belt Community Foundation (BBCF). 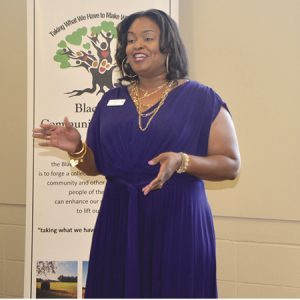 BBCF President Felecia Lucky made sure to thank the many people involved in Linden’s Head Start and Early Head Start programs at the renovated facility’s open house event.

The building has been outfitted with new plumbing, electricity, HVAC, bathrooms, windows and bricking. The Early Head Start Program students also get to play in a new playground complete with crawling and climbing spaces.

The Head Start program in Linden is directed by the BBCF, with the full project a partnership between Community Development Institute (CDI) Head Start, Sumter County Opportunity Early Head Start and Linden City Schools, who also provided the facility.

Funds for the enhancements came from the Office of Head Start, with strong support from Rep. Terri Sewell.

In all, over $1 million was invested in this facility, resulting in new and improved nearly everything for the students and staff of the Head Start and Early Head Start programs.

Lucky said that while the facility may have been completely renovated, the compassion from the teaching staff has not changed one bit.

“We’ve always had a strong teaching staff there, and that will remain the same.”

To Lucky, the role of the program is to make sure kids are educated and have the tools to succeed, which falls in line with the educational outreach that the BBCF takes part in.

“What we’re trying to do in the Black Belt region is make sure our kids have opportunities and access to the best education possible,” she said.

The renovations lasted approximately six to nine months, and, during that time, the Head Start program was housed at the Christian Chapel Baptist Church in Demopolis, for which Lucky said she was grateful.

Though Sewell was unable to attend the open house, she expressed excitement at the expansion of the program which she called “one of the most valuable investments we can make.”

“No matter where a child grows up, no matter who they are or what they look like, it is our job to make sure they reach their full potential. I’m thrilled to see this new facility in the Black Belt, and I am confident it will create lasting change for children, families and the community for years to come.”

The G.P. Austin Head Start and Early Head Start programs will maintain the same service area as before, including Sweet Water, Demopolis, Dixon Mills, Thomaston and Linden. They are open Monday-Friday from 8 a.m. to 3 p.m. To enroll a child in either program, contact 334-431-3706 ext. 1004.

The BBCF is also accepting recommendations for a new board member from Marengo County. To make a recommendation, contact the foundation at 334-874-1126.

(This article originally appeared in the Saturday, August 11 issue of the Demopolis Times.)