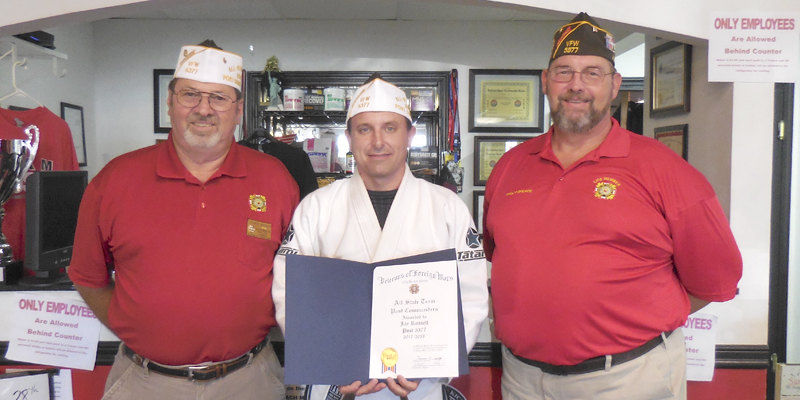 Demopolis’ Veterans of Foreign Wars Post 5377 has once again received All State Team status after attending June’s VFW State Convention 2018 in Birmingham. This is the third year in a row the post returned with that distinction.

Post Surgeon Phillip Spence said it was a big accomplishment because “one of the main things they look at is membership.” Posts must have a 100 percent maintenance rate, meaning that they must replace all members once they are no longer involved with the organization. For Post 5377, which has a total of 82 members and gets very few new recruits per year, that is an accomplishment in its own right.

Spence said the emphasis on membership stems from the VFW’s involvement in politics affecting military personnel.

“The VFW in a lot of ways is a legislative tool by veterans to reach out to our congressmen, our senators [or] even the President of the United States if there is a law pending or a bill before Congress or the Senate that affects veterans, their benefits [and] even active duty military people,” he said.

To be considered for All State Team status, Post 5377 also had to meet other requirements, such as participating in the Patriot’s Pen Program, participating in the Teacher Recognition Program, making the required donations, submitting necessary reports and making appointments to leadership positions within the Post.

Spence said Post 5377’s 13 active members, most of whom have full-time jobs to contend with, put the post on par with other All State Team posts in Alabama, some of which have membership numbers several times that of Post 5377.

“You know the story of the ant and the grasshopper? We’re the ant. We’re continually working all the time,” he said.

Spence also said that the post’s emphasis on the youth community in Demopolis was also a factor in their recognition. Members of the post give flag folding demonstrations in school, finance scholarships and give awards to youth active in the community, such as through Boys Scouts of America or the U.S. Army JROTC.

The community itself also plays a role in the post’s success. Local businesses and other service organizations donate or volunteer often with the post. Spence said that the post once again joining the All State Team lets the community know that their support is not in vain.

“They can look at us and know that everything that they entrust into our hands is being handled properly, that it not only to support the VFW but it goes back in the community.”

According the Spence, the post is a chance to help soldiers and the community, and any recognition or awards is merely a bonus.

“We have a definite love and a definite concern for our nation, and we know that they best way we can help America out … is to recognize the people who are moving in the direction that will allow them at some point in time to become an essential part of the freedom and the liberties that we have,” he said.

To become a member of the VFW Post 5377, attend the post’s next meeting on Aug. 12 at 6 p.m. in the basement classroom of Bryan W. Whitfield Memorial Hospital and bring a DD Form 214.

(This article originally appeared in the Wednesday, August 8 issue of the Demopolis Times.)