Local schools opened its doors Monday to students for the first day of the 2018-19 school year.

DCSS Superintendent Kyle Kallhoff said it was a smooth opening day for students at all four local schools. He said community members made it even more special by meeting and cheering students on as they entered the elementary schools.

“It was a great day. We had the mayor (John Laney), members of our board, Police Chief Tommie Reese, our school financial officer Evelyn James, as well as school staffs greeting our students at Westside and U.S. Jones. It was very nice and we appreciate them taking time to do that for our students,” Kallhoff said. 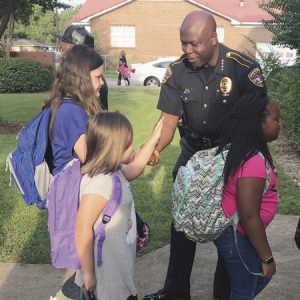 At WES, the beginning of the year marks the start of a third Pre-K program and Kallhoff added that the system just learned a fourth class has been approved, adding 18 more students who will be served. He said the fourth program could start as soon as the end of August or Labor Day. Currently, the program serves 72 with another 12 in specialized Pre-K programs.

At USJ, the school’s new principal, Tori Infinger, greeted students. “It was a good first day (at USJ). I visited the campus several times and teaching and learning was taking place … that’s what we want to see,” Kallhoff said.

At Demopolis Middle School, there is still work being done as part of a summer construction project for compliance with the Americans With Disabilities Act. “We have a few places where there is still construction going on, but the kids are able to move around that,” he said.

Kallhoff also reported a smooth first day at the high school, stating that a new block schedule system will be implemented Wednesday.

One project that system officials were hoping would be completed for opening day is a new STEAM center at the middle school. The center is being constructed in what was once the high school shop class, but more recently used as a storage area for maintenance.

“The lab itself will be finished by Friday. We still need to install computers, which will be done next week, but the furniture will not be delivered until later,” Kallhoff said.

Kallhoff added that students in the DHS welding program are constructing tables for the computer lab area of the center.

One area that requires adjustments each year is traffic flow. “Each year, we have to get used to that process,” he said.

The traffic flow, Kallhoff said, will remain the same at each school except for the middle school.

According to DMS Principal Brandon Kiser, changes were made to help with traffic flow, including that on Cedar Street, which would get backed up during pick-up and drop-off.

“We worked with Chief Reese on a plan that would allow for better traffic flow on Pettus and Cedar streets, as well as allowing residents who live by the school to get in and out,” Kiser said.

Seventh graders will be picked up in the parking lot of the Board of Education Central Office, which is across Pettus Street from the school.

Eighth grade pick-up will take E. Morgan Street, taking a left onto E. Cherry, followed by a left onto E. Whitfield. That traffic will exit onto S. Cedar Avenue.

For morning drop-off, students may be dropped off in the DCSS office parking lot, or by taking S. Cherry or S. Ash streets onto E. Whitfield, then exiting onto S. Cedar Avenue.

“We reversed drop-off, not just to help with flow, but as it was, when you turned onto Whitfield the sun would be in your eyes and that made it more difficult to see the kids coming and going. Now the sun will be at the driver’s back,” Kiser said.

(This article originally appeared in the Wednesday, August 15 issue of the Demopolis Times.)