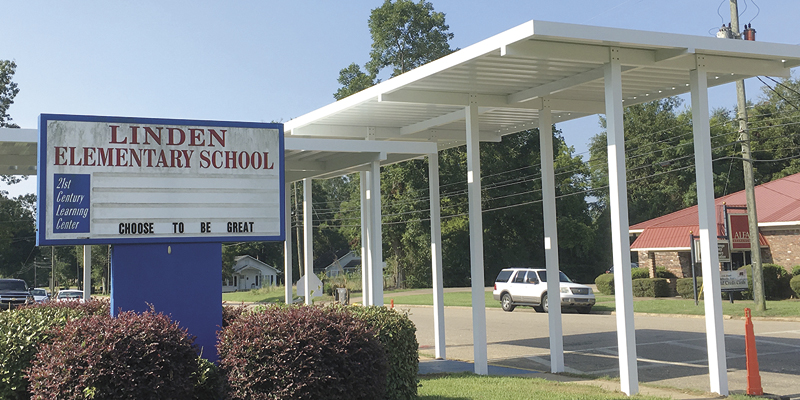 Linden Elementary School was the focus of a $600,000 renovation project this summer. Included in the project was new awning at the entrance to the school.

“Linden City Schools has come a long way in the last couple of years,” Superintendent Timothy Thurman proudly said, referring to the recent renovations and academic achievements made within the school system, which is comprised of three schools and hundreds of students.

Linden Elementary School was the focus this past summer and is currently reaping the benefits of its first renovation in 40 years. The $600,000 project was completed over the summer and included remodeling the front office and the bathrooms, adding new floors in the hallway and an awning outside and painting the walls. 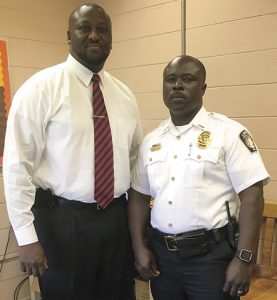 Though part of the project was to make the school a more inviting place, Thurman said safety was the main focus of the renovation.

“We had no idea we’d live in a time where people would just want to harm children,” he said.

Door buzzers have been added at each entrance, so individuals cannot gain access to the school without the office buzzing them in, and a vestibule was created to provide another layer of doors – and door buzzers – between the entrance and the students. Ten additional 24/7 surveillance cameras were also added to cover any blind spots of the existing 15.

Members of the Linden Police Department also perform walkthroughs at the school “just making their rounds and making themselves visible,” Thurman said.

Police Chief Robert Alston said the security upgrades and other renovations at the elementary school will have a positive effect on the entire school system.

“The renovations that are made [at Linden Elementary] are excellent, and they are going to trickle down to the rest of the schools as we go,” he said.

According to Thurman, George P. Austin Junior High School is next on the list for renovations, with plans for a new air conditioning system, gym floors, a vestibule and added security measures.

“George P. Austin is much smaller, so the money will go a lot farther,” Thurman said.

Since renovations for Linden High School may be some time down the road, the LPD is currently establishing a “hub” inside the school where at least one police officer will be stationed during school hours.

Thurman said the hub will have a “positive effect all the way around” by giving students the opportunity to develop a positive relationship with the community’s police officers, deterring students from breaking any laws on school grounds and protecting them from “anybody who would want to come in the school to cause harm.”

An existing room is being cleaned and a computer that the school already owned will be set up soon, meaning that the hub will essentially be created at no cost. Thurman estimated that the hub will be up and running by the end of the month.

Alston said he would split the hub’s schedule between two officers per month, and other officers are welcome to come in during their lunch or other downtime. An LPD laptop will be brought in so officers can continue doing other departmental work while at the high school. “We’re going to try to make sure somebody is up there the majority of the week,” Alston said of the hub’s schedule.

Last school year, all three schools were listed on the Alabama Department of Education’s failing school list. This year, only the high school remains on the list, and Thurman is confident that it will get off soon thanks to the positive performances on this spring’s ACT Aspire tests – the results of which determine which high schools rank in the bottom six percent and, therefore, are listed as “failing.”

Linden City Schools are also benefiting from a recent $145,000 At Risk Grant and a partnership with PowerSchool, which is a technology-based education platform with services for students, teachers and superintendents.

Keeping in line with all of the recent improvements in the school system, Thurman said Linden City Schools will only continue to move forward.

“We’re extremely proud and excited about what the future holds for us.”

(This article originally appeared in the Saturday, August 18 issue of the Demopolis Times.)