Demopolis’ Tommy Vice remembered for his loving spirit, passion for helping others

The Demopolis community lost a close friend Monday morning with the passing of Tommy Vice.

Vice, who has been involved numerous community activities over the years, was a native of Marengo County, born here in 1937. He was 80 years old.

Vice was known to many for his friendliness, faith, and willingness to help others. 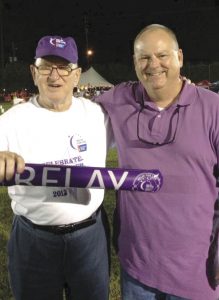 Tommy Vice was a passionate fundraiser for Relay for Life, a cause for which he raised money each year. Vice is pictured above with John Scales during a Relay event.

Among the many friends Vice leaves behind is Marengo County Circuit Clerk Kenny Freeman who would take Vice to Demopolis High School’s home football games.

“That was something we started the first year of the new stadium,” Freeman said. “He loved going early and tailgating. When Coach Causey was there, he’d go to his office before each game and they’d share a short prayer.

“I loved picking him up and taking him to games … we’d speak by phone several times a week and he would always pray for me. I have no doubt where his soul is now and I know he is there praying for us all.”

Vice is known for having a passion for fundraising to help others, especially his efforts raising money for the March of Dimes and the American Cancer Society’s annual Relay for Life.

“He did so much … I don’t know how many years he raised money for March of Dimes. Then, he started raising money for Relay for Life,” said Jennifer Thomason who is also involved in Relay.  “He was committed to those causes and would walk the streets everyday asking for donations.”

It was Vice’s compassion for others that drove — not just his fundraising efforts — but also his daily approach to living.

“His life revolved around helping and loving people.  Through fundraising, he knew he was helping others and making a difference,” Thomason said.

After several years of fundraising for Relay for Life, Vice himself would be diagnosed with cancer. The community established a “Friends for Tommy Vice” group that worked to raise funds for his treatments and other needs. One of those “Friends” is John Scales who was among those who organized a skeet shoot at Soggy Bottom as a fundraiser.

“What a loss to this community. There is no other that could make me feel the way that Tommy did. Just when you would be getting at wits end, Tommy would ask if he could pray for you. This would bring my thoughts to the person that I should be and not the kind of person that has so much going on that I couldn’t stop and thank God for all he has given and done for me.

“Anyone that knew and loved Tommy will always have his memory to fall back on when they might be feeling down and out. What really matters in life was the way that Tommy approached it every day — that we should all love each other no matter the circumstances. I will miss my friend, but I know that he will continue to pray for me,” Scales said.

For those who met Vice, his routine of calling them up, asking how they are and if he could pray for them will be a lasting memory and an important part of his ongoing legacy.

“To know Tommy is to love him … he never met a stranger and was strong in his faith, telling everyone about his Lord and Savior. He called me often and we prayed for each other. Even when he had cancer he prayed for me. His sweet spirit will be missed,” said Melanie Soronen.

A memorial service for Vice is being planned by Kirk Funeral Home and will be announced at a later date.

(This article originally appeared in the Wednesday, August 22 issue of the Demopolis Times.)