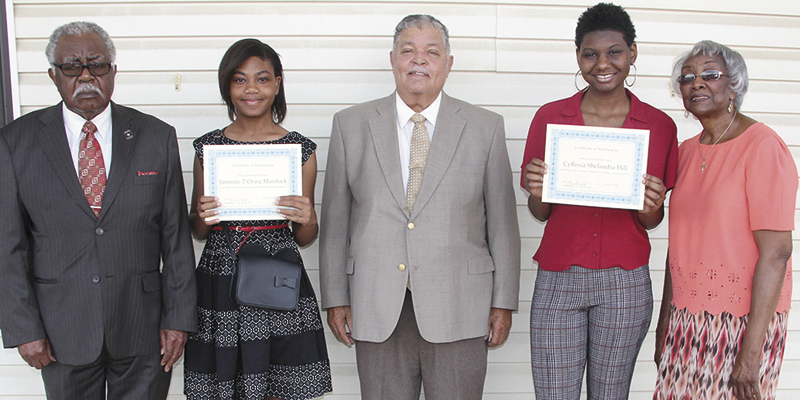 Hill is the daughter of Sheena Hill-Howard of Montgomery and Johnny Hamilton of Greensboro. She is the granddaughter of Cylessidine (Leslie) Hill and the late Sgt. E5 Roscoe Willie Hill Jr. of Demopolis. CyRosia is currently enrolled at Auburn University at Montgomery and is majoring in animation.

Murdock is the daughter of LaToria Murdock of Demopolis and Willie Jones of Indianapolis, Indiana. She is the granddaughter of Julian Murdock and the late Mary Murdock. She is currently enrolled at Shelton State Community College in Demopolis and is majoring in nursing.

The presentation was made during the Class of 1959’s scholarship banquet held at Kora’s Restaurant on August 9. Class members Leslie Hill welcomed the class members in attendance with an invocation by Julian Murdock and greeting from Walter Weiss. A dinner and class meeting followed. Hill serves as the class secretary, Herbert Mullens is the treasurer, Murdock serves on the scholarship committee and Weiss is the class president. Other members included: David Ash, Clara B. Congress, Ruby C. Hill, Bernice G. Hughes, James W. Lee, and Hiram Wilson.

(This article originally appeared in the Saturday, August 18 issue of the Demopolis Times.)