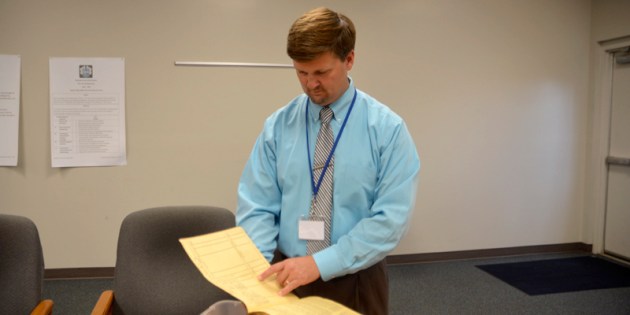 While looking through the 1937-1938 football roster, Superintendent Kyle Kallhoff found two names that may belong to students who are also honored on a plaque at Demopolis Middle School for dying while serving during World War II. 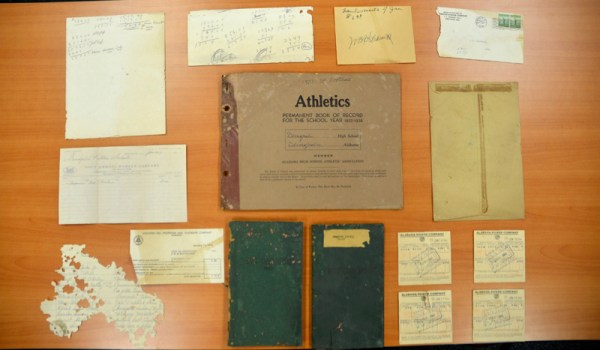 Various documents from the mid ‘30s and ‘40s were discovered during renovations at Demopolis Middle School, including 6 bills (plus envelopes), 2 gradebooks, an athletics record book, a list of names and some calculations on a piece of paper. 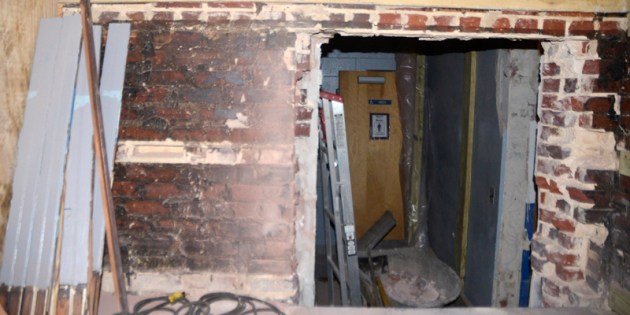 The documents were found while construction efforts for a wheelchair lift were underway.

Hidden between the walls of Demopolis Middle School laid a secret kept for nearly 80 years. That is until the middle school underwent renovations to add a wheelchair lift in the school.

A series of documents and records – six bills, two gradebooks, an athletics record book, a sheet of paper with some calculations on it and a list of names thoroughly chewed by rats all dated between 1936 and 1945 – were nestled between an interior and exterior wall back when the building still housed the high school.

The exterior wall had since been covered after a gym was added fifty years ago and was only recently unearthed when it was knocked down during the first week of August in order to add the wheelchair lift.

That was when Greg Fuentes, a construction worker for Frasier-Ousley Construction and Engineering, found the documents.

“I was a tad bit excited … to see history that old. I didn’t even know the school would be that old,” he said.

Fuentes promptly took the documents to DMS Principal Brandon Kiser, who noted that “It was surprising knowing there was something that far back. Usually when people move they clean things out, but I guess some things can slip through the cracks.”

After taking a look at the documents for himself, Kiser passed them along to Superintendent Kyle Kallhoff, who began looking through the documents with detail noting the differences and the similarities.

“I just thought it was neat. It’s neat to just see a teacher’s gradebook and look at the grades and how were kids performing,” Kallhoff said.

At the time, Demopolis High School still had a strong football team, with a season record of 8-1-0. He also noticed that the season started in October as opposed to this year’s start date in August, and only three of the schools played against have not since closed down or undergone a name change.

Even more noticeable were the prices indicated on the bills. According to bills that were paid in February 1944, Alabama Power Company charged a grand total of $27.46 for electricity for the month of January.

While the exact details are still being discussed, Kallhoff said the documents will certainly be preserved and likely displayed.

“I think citizens and people who are deep-rooted in Demopolis would find it very intriguing to see this stuff,” he said.

At least one student that was included in the hidden records is living and has been contacted, but some may be remembered in another way.

In a hall of DMS, a plaque is displayed thanking eight Demopolis High School students who died fighting for their country during World War II. While flipping through the pages of the gradebooks and the athletic records book, Kallhoff may have found two of those students who were also listed on the 1937-1938 football team roster, though he can’t be certain without additional supporting documents.

Whether the documents were hidden as a time capsule or accidentally fell and were left between the walls has yet to be determined and likely won’t be. It is important to note, however, that the documents were seemingly hidden with no protection in order to prevent deterioration.

Though Kallhoff said it was supposedly common in the early 1900s for documents to be left between the walls of old buildings “sort of like a time capsule”, he also admitted that they may have simply slipped between the walls on accident.

Even if it wasn’t on purpose, Kallhoff said the significance doesn’t change with the intention.

“It’s still a time capsule. It just wasn’t intentionally put in there. It’s still historic documents from almost a hundred years ago.”

And though other theories have been presented as to how the documents ended up between the walls of the school building, Kallhoff said he was still holding out hope that they were left on purpose.

“I would like to think they intentionally put it back there for somebody to find. We’ll never know though, will we?”

(This article originally appeared in the Saturday, August 25 issue of the Demopolis Times.)