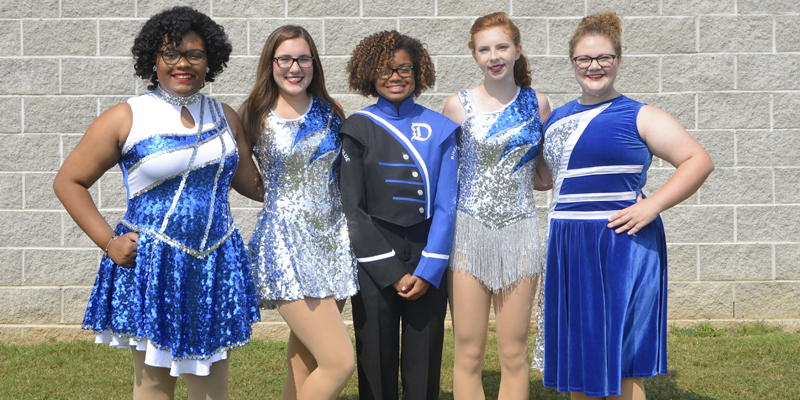 Bands on the River is back at Demopolis High School after a two-year hiatus. Coming Sept. 29, River City Blue’s marching band festival will feature multiple high school bands, all performing the exhibition that they’ve been working on for “weeks upon weeks upon weeks.”

Lasting approximately from 10 a.m. to 7 p.m. at the high school, Director of Bands Demetrius Scott said 10-12 bands have committed to coming as of Thursday, but the goal is to have 20 bands. Each band will perform a 10-minute exhibition, usually consisting of three songs. The festival will primarily serve as an opportunity for critique for the bands as they prepare for competitions.

Other benefits, Scott said, include the festival being used as a fundraiser for River City Blue, which just acquired new uniforms, revenue for the City of Demopolis and the learning experience for the bands.

“A lot of kids get to make new friends, see different programs and see what other schools are doing,” he said.

He also said River City Blue will perform its own exhibition, and he is working on adding a college marching band to the line-up.

Seven judges will be joining the bands on festival day, including three current band directors, three retired band directors and River City Blue’s own Laura Clements, who is the auxiliary coordinator for the band. Bands will be judged on precision, musical accuracy and execution.

While the guest bands will be busy preparing for their performances, River City Blue members will be hosting them, making sure the entire festival runs smoothly.

“This is really our baby so we’re going to be responsible for making sure everything runs smoothly,” Scott said.

He described planning Bands on the River as a collaborative effort between band members and supporters, the school, local businesses and other sponsors of the event. Festival details are being assessed on a week-by-week basis, including publicity, concessions and recording the actual event, which will be undertaken by the high school’s broadcasting club.

Scott has also attended a Demopolis City Council meeting in order to bring awareness for the event, invite Mayor John Laney to present the Mayor’s Award to all participants and request funds necessary for the festival.

The city council obliged, offering $2,000 which, combined with $3,000 donated by Rep. A.J. McCambell, will cover the cost of trophies given out for Superior ratings and for judges. Scott said that the total cost of the event will be about $8-10,000, so those two donations cover about half of the associated. Laney will also be in attendance to give out the awards.

Scott said that, in planning for the festival, they have kept things local whenever possible.

“They support us. We want to support them.”

Bands on the River was previously hosted in 2014 and 2015 but was put on hiatus while the marching band underwent a change in directors. While bringing the event back was high on the to-do list for Scott and everyone involved in the band when he was added as director, it was ultimately decided that it would be best to “get one year under our belts” and then bring it back.

“When you do have a quick turnaround of directors, that makes a difference,” he said.

Scott encouraged local community members and businesses to sponsor the event, which will earn them a free ad in the commemorative Bands on the River program and can take the form of monetary donations or donated goods.

Tickets are $6 for adults, $5 for students and free for children under the age of four. DVD recordings of the event will be sold for $25. T-shirts prices have not been announced yet, as with band shout-outs and programs.

For more information or to become a sponsor, contact Scott at 334-289-0294 ext. 5254 or dscott@demopoliscityschools.org.

(This article originally appeared in the Wednesday, August 29 issue of the Demopolis Times.)