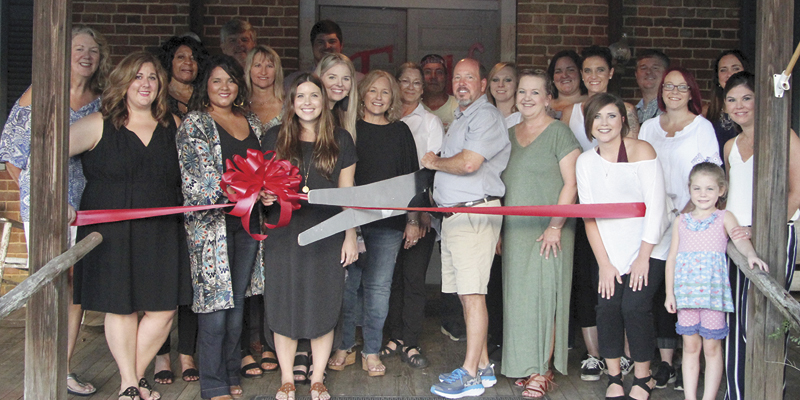 The new owners, employees of the Foscue House Restaurant were joined by members of the Demopolis Area Chamber of Commerce Thursday for a ribbon cutting and Business After Hours event celebrating the re-opening of the longtime Demopolis eatery.

A longtime restaurant, housed in a Demopolis historic home, that recently closed is now back open thanks to a new, yet familiar, new owner.

The Foscue House, located on Hwy. 80 West in Demopolis, closed earlier this year, giving Jacky Poole, owner of Smokin’ Jack’s BBQ in Demopolis, the opportunity he was waiting for.

“We had been talking about it for a few years …. that if this place ever became available we would buy it,” Poole said.

At first, Poole said the idea was to open as venue for parties, weddings and other special events. While Poole is doing just that, he decided to also include the restaurant.

“It has turned out great. We have renovated the back patio and have live entertainment there on the weekends,” he said.

Poole added that his menu at Foscue House gives him the opportunity to explore a whole new menu … one he said has been a hit with patrons so far.

“We wanted to put our stamp on something new and this gave us the chance to do that,” he said. “The feedback has been very positive. We’ve been told our skillet steak is up there with the very best (customers) have ever had.”

The Foscue House was built in 1840 as a small home, but was expanded over time. Poole said he wasn’t sure when it became a restaurant, but that it had been “as long as I can remember.”

The Demopolis Chamber of Commerce was on hand Thursday when the Foscue House hosted a Business After Hours event, which included a ribbon cutting ceremony. Among the attendees were DACC Board Members Gabby Lewis, Amanda Hall, Aretha Muhammad, Lindy McAdams, Michael Mullins, and DACC Executive Director Sidney Freeman.

Along with Poole as owner, Karen Creighton is serving as manager of the Foscue House. Other members of the staff include Madison Poole, Brittney Combs, Kim Howerton, Carmen Thornburgh, Susanna Naisbett, Cathy Cooley, Adley, all of whom were on hand for the ribbon cutting Thursday. Other employees not in attendance included Kendyll Morgan, Veronica Moore, Jami Mayton and Michael Williams.

For more information about Foscue House call 289-1010 or find them on Facebook.

(This article originally appeared in the Saturday, September 1 issue of the Demopolis Times.)