It wasn’t always pretty, but the Demopolis Tigers pulled away from the Bibb County Choctaws to claim their first region win of the season, 39-7.

The first quarter got off to a rough start that included a series of turnovers, two by Demopolis. It wasn’t until midway through the quarter that DHS turned up its running game. Brandon Franklin led the charge with 34 yards, setting up an A.J. Besteder 2-yard touchdown run. Malaki Simpson’s PAT gave the Tigers a 7-0 lead. 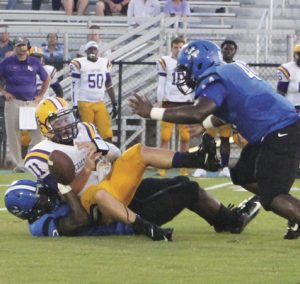 A short kickoff played out well for the Choctaws on their next possession. Aided by a couple key penalties against the Tigers, Bibb County would tie the game as the quarter ended on a 6-yard touchdown run.

After a play that saw Demopolis pick off a Choctaw pass, only to fumble it away, Bibb County was forced to punt. The snap flew past the quarterback and into the endzone leading to a DHS safety and a 9-0 lead.

Quarterback Peyton Stevenson began to find his groove in the game, both in the air and on the ground. About midway through the second quarter, he found Keyjun Gracie open for a 46 yard touchdown reception. The Tigers scored on a two-point conversion when Besteder found Tyquan Alston in the endzone to increase the lead to 17-7, which the Tigers would take into halftime despite having five turnovers in the two quarters.

The second half started well for the Tigers as Fred Haywood came up with an interception on third down, giving DHS possession at the Bibb County 22. The turnover would lead to points when Stevenson hig Gracie for an 11 yard touchdown pass. A fumble on a two-point conversion was recovered by the Tigers’ Hunter Thrash to increase the DHS lead to 25-7.

The score would remain until midway through the fourth when Franklin, a freshman, broke loose on a fourth and one play for 60 yards and another DHS touchdown.  Malaki Simpson’s PAT increased the lead to 32-7.

The Tigers would add another score within the last minute when junior Rashaad Boone found an opening for a 19 yard touchdown run. Simpson’s point-after was good, securing a 39-7 region win for the Tigers.

DHS will travel for another region game on Friday, Sept. 14 against Marbury.