(This article was written by Thomas Scott of the Selma Times Journal.)

Linden High’s Kevin Green fielded the opening kickoff against the Keith High Bears on Friday night in Orrville, and ran the ball up the right sideline all the way back for a touchdown.

The collective groan from the fans in the Keith (1-1) stands was the first of many as the No. 4 Linden Patriots (2-0) defeated the Bears 49-8 in the first region game of the season. 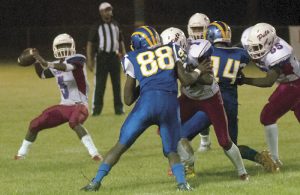 Linden’s Graderius Brown rears back for a deep pass in the Patriots 49-8 win over Keith in Orrville. Brown finished the game with two passing touchdowns, two rushing touchdowns and a punt return touchdown.

Big plays on special teams put the Bears behind early, even though Keith’s defense held the Patriots to just 23-yards in the first quarter.

In addition to the opening kickoff return touchdown, the Bears allowed a 65-yard punt return touchdown and a 50-yard return by Linden’s Graderius Brown in the first quarter.

Brown, who also plays quarterback, let his running back Douglas Johnson get the final touchdown of the first quarter on a six-yard run after his second big return of the night.

By the time the second quarter started, Keith trailed 21-0 and the offense couldn’t get anything going.

Linden’s defense was clogging up the running lanes for Keith running backs Ledell Jackson and Levi Thomas. The Bears top-two backs combined for only 27 yards and no touchdowns.

Quarterback Jared Edwards didn’t fare much better on the ground either. Between the sacks and fumbled snap recoveries, Edwards only netted two rushing yards in the game.

He completed five of his nine pass attempts, but the Patriots secondary held the Bears to only 23-yards through the air.

Keith’s biggest play of the night was an 80-yard kickoff return touchdown by Kendarius Perry to start the second half. Edwards then scrambled untouched into the end zone to convert the two-point play and cut the lead to 29-8 at the start of the third quarter.

However, the momentum was short lived, and the Patriots went on to score three more times in the second half. Once the offense opened up, the Patriots let Brown flourish in the passing game.

“Brown is a hard-worker,” Jackson said. “Tonight, he told me before the game started he would give me a better game than he did last week, and that is what his effort showed tonight.”

“Our offensive coordinator started opening up the passing game a little bit more,” Brown said. “[Keith] gave us a run at first, but we picked it up. I saw a lot of things that I could do. We just had a good game overall.”

(This article originally appeared in the Wednesday, September 12 issue of the Demopolis Times.)