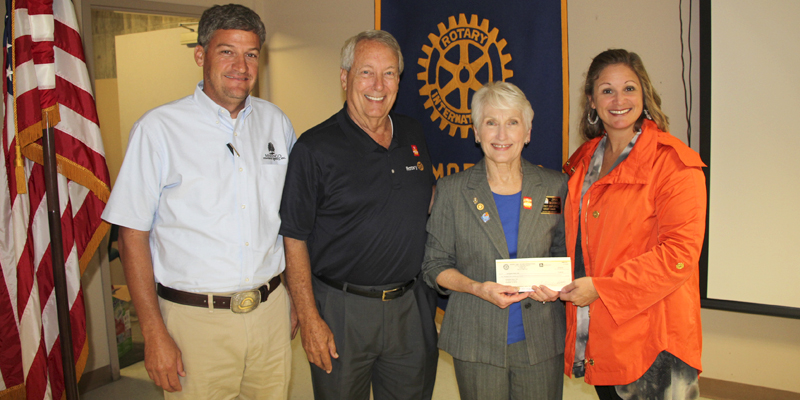 The Demopolis Rotary Club announced Wednesday that it is moving forward with plans to construct a children’s splash pad that could open as soon as summer 2019.

The announcement comes after several years of fundraising specifically for the project, which has an estimated cost of about $55,000 to $70,000.

Rotarians Katie Windham and Jay Reynolds serve as co-chairs of the splash pad project and made the announcement during the club’s meeting Wednesday.

“Through grant opportunities with Rotary and partnerships with the city, county and other civic members, we feel we have the funding to move forward with the splash pad. It is something we are very excited about,” Windham said.

Reynolds said the next step is to find a contractor and to begin construction with the goal of being opened by summer.

The feature will encompass a diameter of about 45 feet with the inner 30 feet being the wet area. Reynolds said there would be 16 jets circling the outer edge with another eight in the middle and one big fountain in the center.

“Anywhere within that 30-feet ring, you’ll be in the water and those jets will be going on and off with a timer,” he said.

Depending on the costs and any money to still be raised or donated, Reynolds said he hoped to add a retaining wall that will allow seating around the pad.

“That may not be in our budget. Right now, we have the money to build the splash pad itself.

“We certainly want to thank the city for providing the land for us to build it and allowing us to turn it over to them once it is built,” Reynolds said.

At the end of the announcement, Bob Kelly, the Rotary District 6880 Foundation chairman, along with Demopolis Rotarian Jan McDonald, who serves as the district’s grants chairman, announced that the foundation approved a $5,500 grant for the splash pad project.