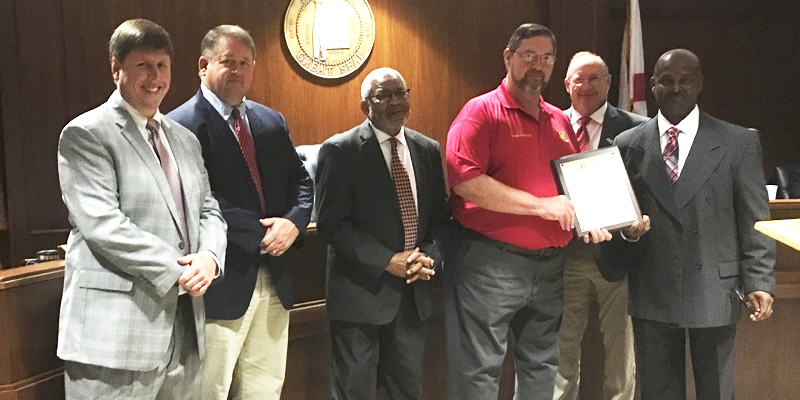 The Marengo County Commission approved the 2018-19 budget to Tuesday following an executive session. The budget was presented as $17.58 million, and expenses are expected to be $14.71 million. That leaves just under $2.87 million of restricted funds. The new fiscal year begins on Oct. 1.

Also following the executive session, the commission entered a contract with the Heart of Marengo Chamber of Commerce for $5,000 for the new fiscal year. This follows a decision made at the March meeting during which Kenneth Barrineau, acting director and chairman of the board for Heart of Marengo, approached the commission asking to enter a contract for $10,000. The commission declined to enter a contract at the time, but did amend the 2017-18 budget to allow $5,000 towards the chamber, with the intent of revisiting the request for the 2018-19 budget.

According to Commissioner Freddie Armstead, as part of the contract, the Heart of Marengo will work with other chambers within the county to further benefit the area.

The commission also approved a resolution allowing the West Dallas Water Authority (WDWA) to service the McKinley community and the surrounding area.

Prince Chestnut, attorney for the West Dallas Water Authority, approached the commission saying that the WDWA was the closest and best-suited water authority to service that area, which is east of Thomaston.

“We did somewhat of a cursory search and found out also that there is not any other water authority within the county that would be contiguous enough, close enough and have the financial wherewithal to service that area,” Chestnut said.

He notified the commission of a recent change in the resolution that deals with issues of responsibility and clarifies that Marengo County is not accountable for the business of the WDWA and vice versa.

County Attorney Woody Dinning said the resolution was “a good opportunity for the residents here.”

• The commission heard three county residents discuss the disrepair of their respective roads. Ellen Tate, a Putnam resident on Bunny Creek Road, said parts of the road and the bridge near her home are so bad, some drivers could not make it through. “The road’s not being taken care of at all. It’s just a mess.”

Commissioner Freddie Armstead told Tate that “somebody’s going to do something about your road.”

Aubrey Patterson, a Coxheath resident on Red Oak Road, said vehicles have sustained damage driving on the road and that “The road is so bad, the school bus turns around in my yard.” Patterson said that he didn’t mind the school bus using his yard, but he wanted the ruts in his yard caused by the bus to be fixed and something to be done to improve the road. Following more discussion, the commission said the engineering department is continuously working to keep up dirt roads in the county.

Beatta McIntosh, also a Coxheath resident on Red Oak Road, told the commission that she has had such a problem with water running that it damaged the floors in her home. County Engineer Ken Atkins said he would meet with her at 9 a.m. the following morning to look into digging a ditch near her home.

• passing a resolution honoring Rita Hill for her dedicated service as office manager to the South Marengo Water and Fire Authority for 40 years.

Martin described her “three-pronged approach” by explaining that she was focusing on business retention, attraction and expansion in order to grow the county’s economy.

“Part of my program now is I’m visiting every single manufacturer in Marengo County,” she said.

She also said that she plans to introduce an Existing Industry Appreciation Week in the future, has joined different organizations associated with economic development and she will attend a “very important” conference in October held by the Alabama Department of Commerce. Martin also told the commission that Airport Industrial Park, Industrial Park South and Linden Industrial Park are on the road to being listed as Alabama AdvantageSites.

• Probate Judge Laurie Hall announced that the Probate Office will be closed on Friday, Sept. 28 while they switch to a new computer system, but online services will still be available and late fees will be waived. She also thanked the commission and Commission Administrator Meredith Hammond for new benches in the courthouse.

(This article originally appeared in the Saturday, September 15 issue of the Demopolis Times.)