For the third time in the young season, the Demopolis Tigers played up in classification, hosting 6A Benjamin Russell. The Tigers are now 2-1 in those games, defeating the Wildcats, 30-10.

The Tigers got off to a fast start when C.J. Williams took the opening kickoff and returned it 81 yards to the 12-yard line. Quarterback Peyton Stevenson took care of it from there, going into the endzone on the first play from scrimmage. Malaki Simpson’s point-after gave Demopolis a 7-0 lead. 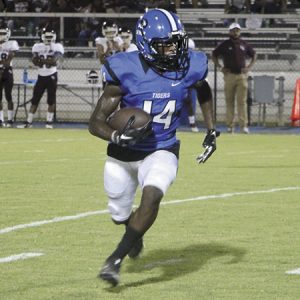 Later in the first quarter, Benjamin Russell came up big on special teams with a 63-yard punt return to the DHS 27. The Tiger defense did not give up much from there, forcing a Wilson Hays field, which was good, cutting the lead to 7-3.

Demopolis would have its best drive of the first half, taking the ball down to the Wildcat 8-yard line, but Simpson’s field goal attempt hit the upright and was no good.

Benjamin Russell began moving the ball on their first possession of the second quarter. Landon Cotney found Ryan Willis for a key pick-up of 15 yards. But, a few plays later, Cotney’s pass to the sideline was picked off by Williams for his second big play of the game.

Demopolis would set up their next score when Stevenson found Tyquan Alston for a 31-yard pass to the Wildcat 3-yard line. A.J. Besteder took it in from there. The point-after was no good, making the score 13-3 with 4:38 to go in the half.

After a good punt return by Benjamin Russell and positive yardage on a reception by Jaikobee Gamble, Cotney once again went to the air, but once again the Tigers’ Williams was ready to make the big play, getting his second interception of the game, and his fifth of the season.

From the 29-yard line, facing a third-and-one, Besteder took the handoff and found running room for a huge 52-yard gain to the 19. The Wildcat defense stiffened, forcing Demopolis to take the 31-yard field goal and increase the lead to 16-3, which they would take into the half.

Benjamin Russell took the kickoff to open the second half and had their longest drive of the game, going all the way to the Demopolis 10. The key play came when Cotney found Xzavia Stowes for a big gain, adding a facemask penalty, to set the Wildcats up at the 9-yard line. But, on third down, DHS’s Josh Mason came up with another interception for the Tigers to end the scoring threat.

Neither team would score in the third, but in the fourth the Tigers, led by Besteder, would turn it up a notch. With 9:15 to go in the game, from their own 45-yard line, went to Besteder on four straight carries, including the final play that resulted in a 19-yard touchdown with 7:35 to go in the game. Simpson’s point-after lifted the Tigers to a 23-3 lead.

The turnover struggles continued for Benjamin Russell when Demopolis recovered a fumbled snap on the following series. It was the Wildcats’ fifth turnover of the game.

While Besteder was leading the Tigers on offense, Williams continued to shine on defense and special teams. He set Demopolis up with good field position on a punt return to the Wildcat 38. On second down and 13, it was Stevenson who found a hole and hit it fast, breaking away from the defense for a 41-yard touchdown. Simpson’s point-after gave Demopolis a 30-3 edge with 2:30 to go.

Benjamin Russell would score late, when Stowes broke through on the kickoff return, being brought down at the 3-yard line by Williams. Keedon Young took the ball in from there, making the final 30-10.

Demopolis (4-1) will have a bye week before hosting Shelby County in a key region game and homecoming on Oct. 5.