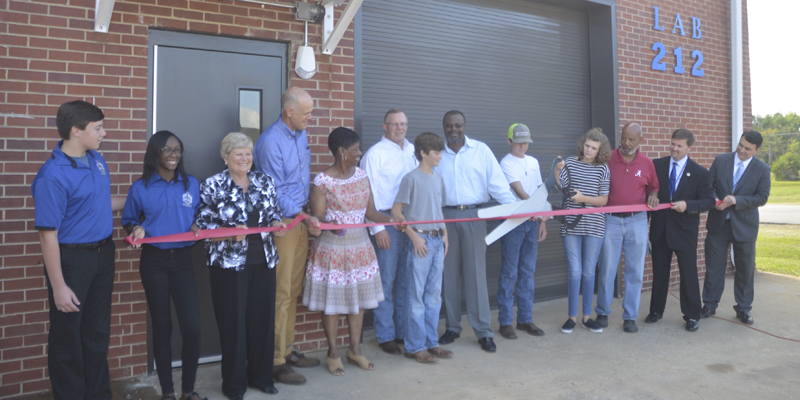 Demopolis City School officials and students cut a ribbon to open the new STEAM Lab 212 on the middle school campus.

Lab 212, Demopolis City School System’s STEAM Lab located in what was once the system’s maintenance crew’s old shop building at the middle school, officially opened its doors at a ribbon cutting on Friday.

Through Lab 212, the latest technology, such as Chromebooks, Google Expedition virtual reality headsets and 3D printers, will be available to every student in the school system. A bus and bus driver will also be available to teachers at other schools who need to transport students back and forth for classes.

Superintendent Kyle Kallhoff and other system leaders were inspired to create the lab after seeing teachers’ creativity in making the best use of their own classroom space for STEAM-related projects.

“After watching that for three years and watching teachers, despite what environment they have, be creative and do the best they can, it dawned on us as leaders that we need to give them a space to do this,” Kallhoff said.

Lab 212 was almost over as quickly as it began when the building’s structural integrity was questioned. Though the space was quickly deemed safe and renovations resumed.

Brandon Kiser, principal of Demopolis Middle School and former science teacher, used his background to provide insight as to what technology would benefit the students most. While it was collectively agreed to include things such as virtual reality goggles and computers built to the same specifications as those as Two Rivers Lumber Company, Kiser’s suggestions included the lab’s Sphero robots and Makey Makey STEM Packs.

“It wouldn’t be as innovative as it’s going to be without him,” Kallhoff said.

An advanced audio system and 360-degree camera will make teachers’ lessons easy to present and available to download for future use.

Kallhoff said the purpose of the lab was to expose students to technology and inspire them to pursue STEAM-related fields.

“The bottom line is we want to make sure when our kids graduate they are ready for college, work or the military.”

Ben Scheierman of the Alabama State Department of Education said the early exposure that Lab 212 provides students with “the tools to start to decide what they might want to do at the high school level and what courses they might pursue in career technical education and what career path they might take.”

The $500,000 project was funded by part of the school system’s reserve, federal sources, local sources as well as a $7,000 donation from Rep. A. J. McCambell and Sen. Bobby Singleton.

McCambell said “I’m excited about this opportunity because we are living in a different and changing world, and it’s very important, as leaders, that we recognize you have to invest in the future.”

The architect for Lab 212 was McKee & Associates and the contractor was Frasier-Ousley Construction and Engineering. R&D Mechanical also helped build the lab. Tables and lettering were built by welding students at the high school.