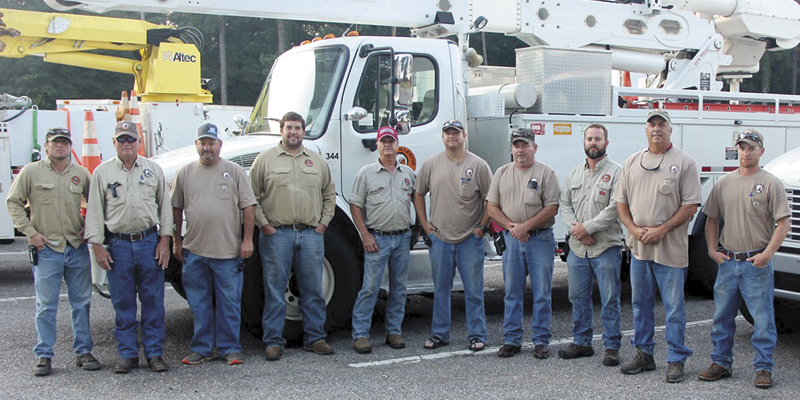 Black Warrior Electric Membership Corp. sent manpower and equipment to North Carolina to help utilities there restore electricity in the wake of Hurricane Florence, which knocked out power to hundreds of thousands of residents and businesses.

Black Warrior crews left Friday morning for Rockingham, North Carolina, just as the storm came ashore at Wilmington and began its slow move across the state, dumping record levels of rain and causing catastrophic flooding. The crews consisted of 10 linesmen and five trucks, including three bucket trucks. They were assisting Pee Dee Electric in the south central part of the state.

“This storm obviously is devastating for residents of North Carolina, and it places a tremendous burden on all public services, especially utilities,” said Daryl Jones, manager of Black Warrior Electric. “In times like these, electric co-ops and utility companies in Alabama and other states are quick to respond because we know how critical restoring power is to helping an area. We certainly want to help in any way we can.”

Michael Barnes, who works out of Black Warrior’s Demopolis division, is foreman of the crews, which also include linesmen from Eutaw, Butler, Linden and Greensboro.

“We have two big buckets, a derrick truck, a small bucket, a pickup and a trailer full of equipment,” Barnes said. “We are going to do our best to help out.”

After working with Pee Dee Electric, Barnes said he expects his crews to move closer to the shore to help other utilities.

Alabama electric co-ops often send crews to other service areas and states to help with recovery after storms. In return, co-ops from other states come to Alabama to assist in the aftermath of storms here.

“We assist them, they assist us,” Jones. “The most important thing is to help people in need. The next time it could be us.”

In recent years, Black Warrior and other Alabama co-ops have sent crews to Florida and Georgia. Jones said he doesn’t know how long his crews will be in North Carolina, but past deployments have lasted three to four weeks.

Black Warrior Electric is a member-owned cooperative that serves about 26,000 residents and businesses in 12 counties in west central Alabama.