Jo Ellen Martin, executive director of the Marengo County Economic Development Authority, had been waiting for the perfect opportunity to grow an area’s economy and move close to her family in Mississippi. Having been raised in a rural town herself, Martin said rural communities, the ones where children are often forced to leave their families in order to find a better job market, are close to her heart. 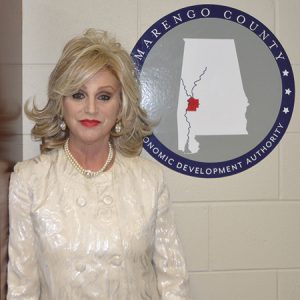 That’s why, she said, when the opportunity to become the new executive director of MCEDA presented itself, she felt like it was a “God-given opportunity.”

“I have always had a passion for economic development as it impacts not only individuals but entire communities; I asked God to show me a way and “open a door” to help people that were homeless and in need of jobs; and, I am doing this for a purpose greater than myself,” she said.

Passion for economic development wasn’t all that Martin came to Marengo County with. In the month since her first day, Martin has kept herself busy with her three main goals for the county’s industries: attraction, retention and expansion.

Part of her plans to bring in new industries include updating the website to include up-to-date information about incentives and industry testimonials. She is also following through on the Alabama AdvantageSite listing for Airport Industrial Park, Industrial Park South and Linden Industrial Park, which would mark the industrial sites as ready for immediate use by companies, that her predecessor Chris Bontrager started.

Martin said she currently has four or five prospects that are “actively brewing,” and she is not solely focused on big companies.

Martin has been working to establish relationships with industry leaders all over the county and creating partnerships with the economic development sections within companies. She plans to increase community awareness about the industries and establish an Industry Appreciation Week in the future, as well.

Martin plans on establishing an area-wide manufacturers association so plant managers have a way to maintain communication with each other. She has also been in touch with Shelton State Community College for workforce development.

Ultimately, Martin’s plan for Marengo County can be summed up in a few words: “Go and grow Blackbelt.” Thankfully, Martin said she’s been met with enthusiastic and invested community leaders, who make her job much easier.

“They’re willing to give their money and their time and commitment to economic development in Marengo County, and when you’ve got that, that’s half the job right there,” she said.

“There’s not been much of a learning period with that experience. She’s been able to take things and really start going with it,” MCEDA Board of Directors Chairman Kevin McKinney said.

(This article originally appeared in the Wednesday, September 26 issue of the Demopolis Times.)