The Demopolis Tigers jumped on top of the Shelby County Wildcats early, scoring 27 points in the first quarter, leading to a 40-12 region win for homecoming. 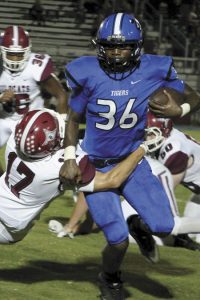 The Tigers drew first blood, taking possession at their own 44 after the defense stopped Shelby County on a fourth down. Keyjun Gracie was a key player in the catching two big passes, one for 17 yards and the second a 21 yard reception in the endzone. Malaki Simpson’s point-after gave the Tigers a 7-0 lead with 8:02 left in the first quarter.

That score didn’t stick long as Kyjuan Rhone came up with a big time special teams play, picking up a Shelby County fumble and returning it to the endzone. The point-after gave Demopolis a 14-0 edge.

After another defensive stop, the Tigers turned to their running game, specifically freshman Brandon Franklin, who took six consecutive handoffs for a total of 57 yards, the final carry being 10-yard gain into the endzone. Simpon’s PAT lifted the Tigers to a 20-0 lead with 3:30 in the first quarter.

Demopolis continued to add to its lead, once again scoring on special teams when the Wildcat punter fumbled the ball allowing Tavian Brown to pick it up and return it 17 yards into the endzone, leading to a 27-0 lead after the PAT.

The Wildcats would get on the board in the second quarter when Chase Holliman found Tyrese Goodman for a 54-yard pass into the endzone. A two-point attempt failed bringing the score to 27-6 with 4:24 to in the half.

Demopolis answered right away, this time leaning on senior runningback A.J. Besteder who set up a touchdown with a 40-yard run to the 15 yard line. A few plays later he would take it in from six yards out. Simpson’s point-after secured a 34-6 lead at the half.

With the quarters decreased to only 10 minutes and a running clock, the second half was quiet in terms of scoring. However, Besteder continued to have a good night getting a few more carries and finished with over 150 yards on the night.

The Wildcats would score late when Goodman made another big play, hitting a hole and going 54 yards into the endzone.  A two-point attempt failed, cutting the lead to 34-12.

With the clock winding down, junior Rashaad Boone found some running room for Demopolis and broke a tackle enroute to a 33-yard touchdown run, leading to the 40-12 final score.

With the win, the Tigers improve to 5-1 on the season and 3-0 in region play.

Demopolis travels to Central-Tuscaloosa for another region matchup on Oct. 12.

(This article originally appeared in the Saturday, October 6 issue of the Demopolis Times.)