The Marengo Panthers improved to 7-1 on the season with a nail-biter victory over their south Marengo County rival Sweet Water Bulldogs, 19-12.

The contest came down to a final drive with the Bulldogs looking to at least tie the game. Taking possession with 6:50 to go in the game, Sweet Water drove the ball as far as the 12-yard line when Panther Ronald Bouler got into the Bulldog backfield and brought down Bulldog quarterback Braiden Broussard for a 12-yard loss. On the following fourth-down play, Broussard’s pass toward the endzone was intercepted by Dominique Harris to preserve the lead and the victory for Marengo. 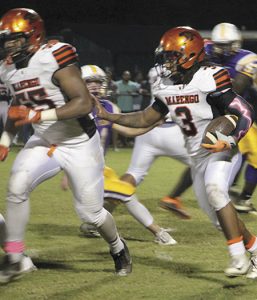 It was Sweet Water taking the early lead in the game. Jacory Brown scored first on a three-yard run. The point-after was blocked.

Sweet Water increased its lead to 12-0 on Brown’s second touchdown, this one from 16 yards out.

But, from there it was Marengo scoring all the points. Phelix Hosea scored from one yard out and Roosevelt Thompson added the extra point.

On their next possession, the Panthers took a 13-12 lead when Thompson bulldozed his way 11 yards for the score. This time the point-after was blocked.

Marengo would increase its lead to 19-12 at 4:02 in the third when Alphonzo Lewis made his way into the endzone.

Marengo will host Millry next week while Sweet Water travels to J.F. Shields.