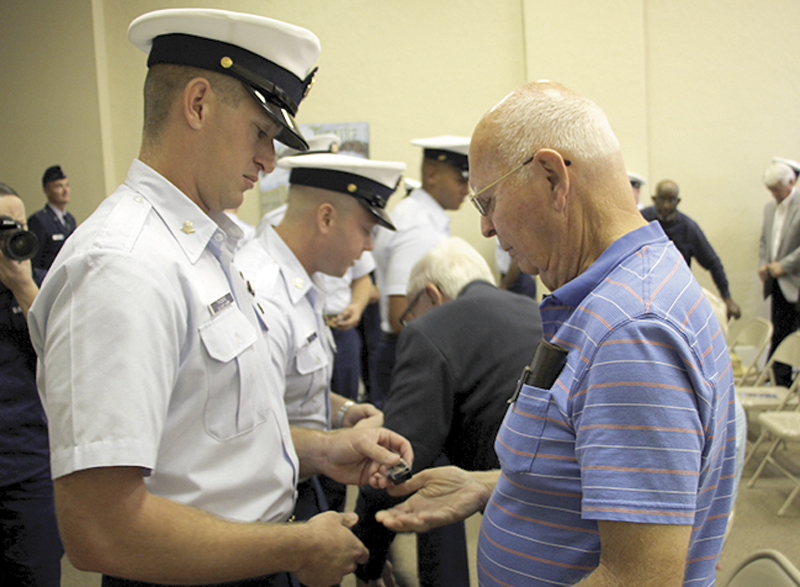 A member of the Coast Guard Cutter Wedge crew presents local Vietnam Veteran Al Windham with a pin commemorating the 50th anniversary of that war.

The crew of the U.S. Coast Guard’s Cutter Wedge stationed in Demopolis held a special ceremony Friday to honor local Vietnam Veterans as part of an ongoing 50th Anniversary commemoration of that war.

With many local Vietnam Veterans in attendance, members of the Wedge presented each with a commemorative pin in recognition of their service and sacrifice. 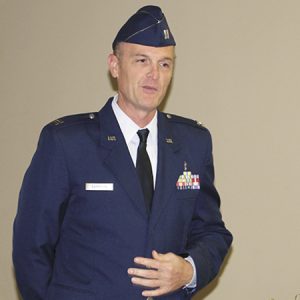 The Vietnam anniversary is being recognized over the course of 13 years, from May 2012 through November 2025, by Presidential Proclamation. The commemoration is recognizing those who served from November 1955, coinciding with the official designation of the Military Advisory Group-Vietnam, through May 1975, which marks the end of the battle precipitated by the seizure of the SS Mayaguez.

For the crew of the Cutter Wedge, the program is part of an ongoing effort by the Coast Guard to honor 1,200 veterans at 12 units over the course of 12 months, called the 12×12 Campaign.

“It’s important that we honor (the veterans), to meet them and pay our respects for their service,” said Sr. Chief Kyle Norman, officer in charge of Cutter Wedge.

The speaker for the event was Capt. Terrey Garrison, chaplain at Keesler Air Force Base, who spoke about courage and sacrifice of veterans, citing the story of the USS Dorchester. The Dorchester was carrying almost 900 people on Feb. 3, 1943 when it was hit by a German torpedo.  Four chaplains, a Catholic, a Jew, and two Protestants, who did not hesitate to put others before themselves, offered prayers and assistance, even taking off their own life preservers to give to other crewmembers. Survivors of the Dorchester reported seeing the four Army chaplains lock arms and pray in unison as the ship sank.

The four chaplains were each awarded the Purple Heart and the Distinguished Service Cross and Congress created the Four Chaplains’ Medal, which was presented to the survivors of the Dorchester in 1961.

The full story of the USS Dorchester can be read at armyhistory.org.

Also involved in organizing the Vietnam Veterans event was the Veterans of Foreign Wars Post 5377 and William Coplin who provided the downtown facility where the program was held.

(This article originally appeared in the Wednesday, October 10 issue of the Demopolis Times.)