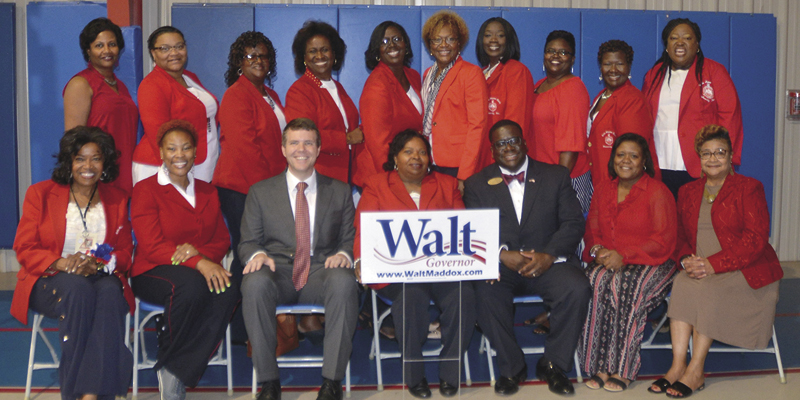 Members of the Delta Theta Sigma sorority with gubernatorial candidate Walt Maddox and lieutenant governor candidate Will Boyd, both Democrats, during a Voter Education Seminar held Monday at the Theo Ratliff Center.

Mayor of Tuscaloosa and gubernatorial candidate Walt Maddox shared his platform at a voter education seminar on Oct. 8, which lasted from 5-8 p.m. and featured presentations from several elected officials in the county, at the Theo Ratliff Activity Center.

Governor Kay Ivey was invited to attend the voter education seminar but was not present at the event, according to organizers.

Maddox also spoke about infrastructure, saying that “20 percent of Alabama’s bridges are functionally obsolete … that means an engineer said that you should not go over those bridges.”

In regards to education, Maddox said that education in Alabama continues to rank near the bottom “in every indicator that matters … Yet our teachers have basically taken a pay cut over the last ten years. Our school systems are struggling to just keep their buildings maintained.”

Lastly, Maddox addressed healthcare. He said healthcare was the top issue facing Alabama as the Center for Disease Control released data in August ranking the state highest in the nation for infant mortality with 9.03 deaths per 1,000 live births.

Maddox went on to say that “across our state, healthcare is in crisis” and that hospitals and medical centers have been closing.

“The Alabama Hospital Association estimates that if we do not expand our Medicaid in the next two years, you could see more than 12 hospitals close in our state,” he said.

In concluding his speech, he encouraged attendees to register to vote, no matter who they intended to vote for, and to bring somebody to vote with them.

When asked how Maddox planned to involve Marengo County elected officials in his plans as governor, he said “We’re going to need their help because one of the areas in our state that has struggled for decades—both under Republican and Democrat governorships—has been the Black Belt. I know the representatives here are working incredibly hard but their success is going to be predicated by how much support they get out of the governor … They’re going to have a friend in Walt Maddox as their governor.”

Lieutenant Governor candidate Will Boyd also shared his platform with attendees in a brief speech at the event. He expressed support for investment in jobs, transportation, healthcare and education.

Boyd concluded his speech by encouraging attendees to vote in the upcoming election.

“Whether you’re Republican, Independent or a Democrat, nothing changes until we learn to get out to vote,” he said.

In addition to Maddox and Boyd sharing their platforms, Assistant Director of Elections at Alabama Secretary of State Clay Helms, Probate Judge Laurie Hall, Board of Registrars Chairman Barry Hunt and District Attorney Greg Griggers also spoke to the crowd about voting and voting rights.

Helms gave a presentation about registering to vote and reminded everyone that the deadline to do so is Oct. 22. He said that registration can be done online, through mail or on the Vote for Alabama app.

“My job is to make sure you have all the things you need to [vote],” Helms said.

He also said it was important to verify and update all necessary information, which can also be done online. By doing so, the participant would receive a new voter’s card. Photo IDs are also necessary to vote on election day, Helms said. He also said free photo voter IDs are available at the Marengo County Board of Registrars office.

Helms said sample ballots are available online at alabamavotes.gov and can be taken to the polling place. He also said that election publications are available in braille and all polling places have AutoMARK machines to make voting more accessible to voters with disabilities or impairments.

Griggers then spoke about how to regain lost voting rights. He said 46 types of offenses cause the loss of voting rights, but only two cause that loss to be permanent and 14 require a pardon in order to regain voting rights.

In order to regain voting rights for the offenses that do not require a pardon, Griggers said to fill out an application with the Alabama Board of Pardons and Paroles and to be mindful of tight deadlines.

Griggers said to the crowd, “What’s worse than not having a say?”