Demopolis closes on area title with blowout of Jemison

The Demopolis Tigers took another step toward its goal of being region champions with a shut-out win over Jemison Friday night, 50-0.

After an early interception by C.J. Williams, his seventh of the season, Demopolis went deep as Peyton Stevenson found Tyquan Alston for a big 41-yard pass to the 5-yard line. But the Jemison defense held, ultimately blocking a field goal attempt.

The offenses would remain silent through much of the first quarter. But, in the second Demopolis began to roll. 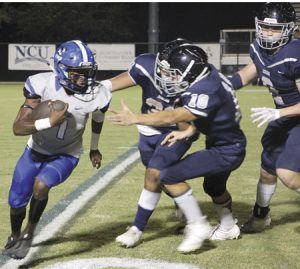 C.J. Williams returns an interception on the first series against Jemison Friday night. For Williams, it was his seventh interception of the season.

In a drive that started in first, the Tigers would lean on their top rusher, Antonio Besteder, who would pick up a total of 45 yards on the drive, including a 6-yard touchdown run. Keyjun Gracie also came up big on the drive hauling in a 30-yard reception from Stevenson. Malaki Simpon’s PAT gave the Tigers a 7-0 edge at 9:52 in the second quarter.

After a defensive stop and punt, the Tigers wasted little time adding to their lead as Stevenson hit Tyquan Alston who went 47 yards into the endzone on the first play of the possession. Simpson’s point-after was good, making the score 14-0.

Another three-and-out forced by the Tiger defense led to DHS taking possession at the Jemison 48. After a running play lost one yard, Stevenson hit Gracie once again, this time going all the way into the endzone for the touchdown. The point-after increased the Tigers’ lead to 21-0

A nice return followed by a 20-yard pass and some positive running put Jemison in possession to cut into the lead. But, the Tiger defense held at the 4-yard line forcing a field goal that missed the mark.

With only 59 second left, DHS Coach Brian Seymore took a shot downfield on the first play from scrimmage, which resulted in Stevenson finding Gracie on a slant and going all the way, 80 yards, into the endzone. Simpson made the halftime score 28-0 with his extra point.

Demopolis would continue its domination into the second half. Starting on defense, the Panthers saw two of its passes knocked down by linebacker Josh Mason. Then, it was Alexander Besteder coming up with an interception to give the Tigers possession at the Panther 20.

The Tigers connected on a 50-yard pass from Stevenson to Alston to the 23. DHS drove as far as the 2, but couldn’t knock it in, turning the ball over on downs at the 3.

On second down, Davian Williams tracked down the Panther runner behind the goal line for a safety, making the score 30-0 with 5:28 to go in the third.

On the kickoff to Demopolis following the safety, Alston once again had a big play, returning it to the 16 yard line. The very next play saw Brandon Franklin take it all the way in for another score. Simpson’s point-after made the score 37-0.

That score didn’t last long as Tavian Brown picked up a fumble for the Tigers and returned it 56 yards to increase the lead to 43-0 and Simpson’s point-after made it 44-0.

Jemison had possession going into the fourth, but on the first play of the quarter, Mac Logan picked off a Panther pass and returned it to the 17. The interception was the fourth turnover of the night in favor of Demopolis.

The turnover led to a screen pass to senior Grey Tripp who took it 11 yards into the endzone for the final score of the night, making the final 50-0. The point-after attempt was no good.

With a win next week on the road at Chilton County, Demopolis will clinch the Class 5A Region 3 title.

(This article originally appeared in the Saturday, October 20 issue of the Demopolis Times.)