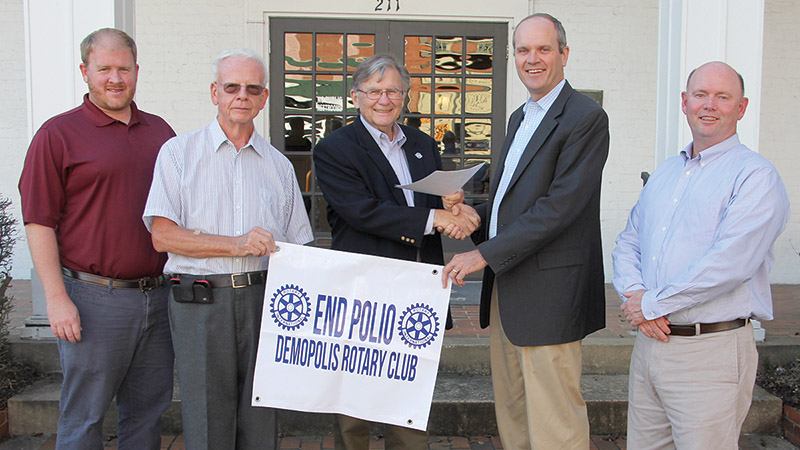 What would you think if you woke up on Monday morning with a slight headache and by the end of the week you could not move your legs? This nightmare has recently occurred to clusters of children in Colorado and Minnesota as the Center for Disease Control reported a mysterious outbreak of acute flaccid myelitis which mimics symptoms of polio. Could it happen here? It already has. In 1941, newspapers across Alabama were reporting widespread polio outbreaks across the state. Some simply contracted flu like symptoms.  Others were permanently paralyzed, some died. Why?  Polio is a virus that attacks the nervous system. It can be transmitted through direct contact with someone infected with the virus or through contaminated food and water.  There is no cure for polio, but it can be prevented. Fortunately, in 1955, Dr. Jonas Salk, developed a vaccine which stopped the virus dead in its tracks. In 1979, Rotary, an International Service organization and the Demopolis Rotary Club chose to lead the way to eradicate polio around the world and thus help protect everyone.

As a result of Rotary’s efforts over 2.5 billion children have been vaccinated and protected from polio. Salk’s birthday is celebrated in October in Demopolis by raising money for polio eradication. The Demopolis Rotary Club has raised over $1,200 this year to fight polio around the world. The City of Demopolis has also proclaimed Oct. 24 to be Polio Eradication Day to raise awareness and support to end this dreaded disease.

How effective has Rotary been? In 1979, there were over 350,000 polio cases worldwide in over 100 countries. As of today only two countries are still reporting cases of the wild polio virus. But Rotary is not resting until every country is clear. Teams of doctors, nurses, researchers, analysts and field study personnel must be supported along the way in order to keep polio at bay and ultimately defeat it. The vaccine itself is very inexpensive because Dr. Salk and those who followed him chose not to get a patent, recognizing this life-saving discovery was bigger and more beneficial to the world than any paycheck. Salk is a true inspiration of the love he had for his fellow man.

The Demopolis Rotary Club invites the public to join them and “Be the Inspiration.”  Be a part of history by giving generously to End Polio Now. To donate, contact a local Rotary club member or go to rotary.org for more information.