In its final region game of the season, the Demopolis Tigers defeated Chilton County, 38-17, to remain perfect in the region and secure the 5A Region 3 championship and securing a home game for the first week of the playoffs.

Demopolis saw a big play in its first possession as Peyton Stevenson hit Tyquan Alston for 50-yard pass, but the drive ended when a mishandled snap led to a turnover. 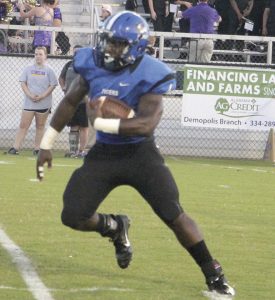 The Tigers would get a turnover later in the first quarter when Jay Jones hauled in his second interception in as many weeks, setting DHS up at their own 28.

On the first play, Stevenson went to his favorite target this season, Keyjun Gracie, for a 23-yard gain, close to midfield. Between a few penalties against the Tigers, A.J. Besteder would get a big chunks of yardage on runs of 11 and 17 yards, down to the 25. Once again,Stevenson found Gracie for a pick up of 11 yards and a few plays later Besteder would take it in from three yards out, giving Demopolis a 6-0 edge. Malaki Simpson’s point-after made the score 7-0 with 3:28 to go in the first quarter.

On the following possession, Chilton County picked up a bunch of yards on a QB run, 44 yards, to the 15, setting up a 31-yard field goal to cut the lead to 7-3 early in the second quarter.

The Tigers got their offense going again, with Stevenson picking up 12 yards followed by a screen pass to Gracie for a big gain of 38 yards. Demopolis suffered several penalties, but Brandon Franklin got a bunch of it back with a  21-yard run to the 13. Facing a fourth-and-eight, the Tigers went to Franklin again who picked up 10 yards for the first down. After a nine-yard gain by Stevenson, Franklin finished off the drive with a four-yard run into the endzone. Simpson’s point-after gave the Tigers a 14-3 lead with 7:47 to go in the first half.

After the defense backed Chilton County up, the punt led to the Tigers taking possession at midfield. From there, Besteder had consecutive runs totaling 22 yards. Then Stevenson hit Besteder on a short pass that ended up a big gain, 41 yards, down to the 13. Stevenson picked up six on the next play and Besteder finished it off with a seven-yard touchdown run. Simpson was good on the point-after to increase the Tiger lead to 21-3 with 2:28 in the second quarter.

The Tiger defense did its job in getting a three-and-out, forcing a punt and setting up DHS near midfield with 1:55 to go. A few plays later, Stevenson found Gracie once again who took the ball all the way to the 2-yard line. But, DHS went backward from there, leading to a 26-yard field goal by Simpson to give the Tigers a 24-3 lead going into the half.

The Tigers picked up in the second half holding Chilton to a three-and-out and taking possession at their own 27 after the punt. Demopolis would lean on its senior runningback Besteder on a long 15-play drive that ended with him taking it in from three yards out to give the Tigers a 31-3 edge after Simpson’s PAT.

A big kickoff return gave Chilton County a good start on the following possession and they would end up taking it into the endzone to make the score 31-10 early in the fourth quarter.

Demopolis would get that lead back though when  Franklin hit a hole and turned up the speed to go 72 yards for a touchdown. Simpson’s point-after made the score 38-10 with 10:45 to go.

Chilton would hold on to the ball for most of the fourth, using a 14-play drive — converting on three fourth downs — to go 65 yards into the endzone, leading to the final score of 38-17.

With the win, the Tigers are now 8-1 overall and finish region play at 6-0. They will host Jackson in the final regular season game next week.