Dr. Ronnie Chu of Demopolis and University of Alabama at Birmingham professor Janelle Chiasera, PhD, hosted a community meeting at Bryan W. Whitfield Memorial Hospital on Oct. 23 to rally support for their UAB Grand Challenge Program grant proposal. If selected, their project to increase the number of rural healthcare professionals will receive $5 million in funding over the course of five years. 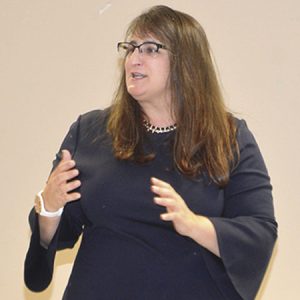 To increase the number of rural healthcare professionals, Chu and Chiasera plan to assess the needs and available resources in an area and build community hubs that will meet those needs with additional physical and digital resources.  For the initial part of the grant, they plan to build a hub in the Demopolis area to serve all of Marengo County and another in Birmingham.

They also plan to focus on the youth in the community in order to prepare them for a career in healthcare.

“If you guys want more doctors … you’ve got to get the kids around here and nurture them, so they can get enough education, they can compete with the others and they can come home,” Chu said.

The pair have already been awarded $30,000 in September for a planning grant proposal, which will be go towards the costs necessary for creating their full proposal over the course of four months, such as community meetings, research, marketing and travel.

In order to bring their plan to fruition, Chu and Chiasera will focus on the educational and health needs of a particular area, such as college application assistance or health screenings, and customize the hub based around those. They also plan to eventually create hubs all over the state of Alabama.

“We want to bring resources there and localize them and have them owned and operated by the folks in the community,” Chiasera said.

She also explained that the Demopolis area and Birmingham were chosen as the first two locations of the project to show that the customizable community hub strategy works in rural and urban areas to increase opportunities for expansion into new areas.

Chiasera said that Christopher Brown, vice president of Research at UAB, will help them find alternative funding for the project even if the grant proposal is not chosen by the Grand Challenge Program.

Success of the grant will be measured through short and long-term goals as it is a “generational project,” according to Chiasera.

“We really are going to be starting in kindergarten and we aren’t going to see some of those outcomes until some of those students hit college-age or even greater.”

She also said that community involvement is vital in the project’s success.

“One of the things needed on this project is a tremendous amount of community support.”

The next community meeting will be in November and community members who wish to be involved can contact Chiasera at chiasera@uab.edu.