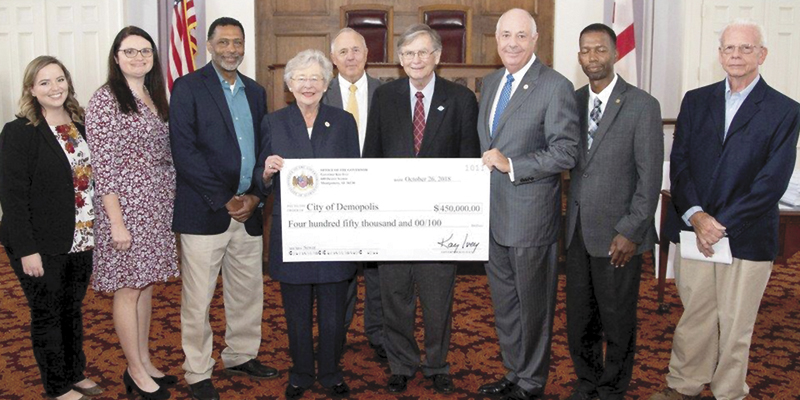 Governor Kay Ivey presents $450,000, awarded through a Community Development Block Grant, to representatives of Demopolis on Friday. The grant will be used for a $600,000 sewer line update project in District 1, in the downtown area.

The City of Demopolis was awarded a Community Development Block Grant on Friday that will be used for replacing old sewer lines in a portion of the city.

The Demopolis Water Works and Sewer Board is overseeing the project while the city was serving as the agent for the grant. The project will cost about $600,000, with the CDBG grant awarded last week providing $450,000 of that total. 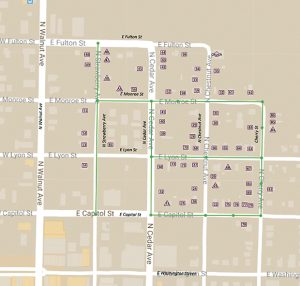 Map showing where updated sewer lines will be placed.

“These are some of the oldest lines we have and one of the areas needing the most attention as specified by the water and sewer board,” said Mayor John Laney.

The Alabama Tombigbee Regional Commission worked with the city and Civil Southeast Engineering provided the design in applying for the grant.

On Friday, Laney, along with councilmembers Charles Jones Jr. and Cleveland Cole, traveled to Montgomery where Governor Kay Ivey presented the grant award. In all, about $17.8 million in grants was awarded to 54 Alabama towns, cities and counties.

“The beginning of a better Alabama starts today for many residents who are without clean water to drink or safe roads to drive or suitable housing in which to live,” Governor Ivey said. “I am pleased to award these grants to support vital community improvement projects, and I commend the dedicated local officials who sought these grants with the intent to make their communities better places to live.”

Community Development Block Grants are awarded annually through a competitive process in four main categories including small city, large city, counties and community enhancements. Other categories in this round include Black Belt and planning grants. Award determinations are based on the number of low and moderate-income families affected, urgency of the need and project cost efficiency.

The Alabama Department of Economic and Community Affairs administers the grants from funds made available by the U.S. Department of Housing and Urban Development.

The Black Belt Fund, serving 12 counties across the region, was also awarded $450,000 for drainage improvements.

(This article originally appeared in the Wednesday, October 31 issue of the Demopolis Times.)