With the region title already earned, the Demopolis Tigers took on a pre-playoff test in the Jackson Aggies and ended the regular season with a loss, 21-7.

After exchanging – punts on the first few possessions, Jackson got on the board on a 47-yard run and the point-after made it 7-0.

The Jackson defense continued to hold back the Tigers while the DHS defense was also doing it job. Back to back sacks by Tavian Brown and Aaron Collier stopped some positive momentum for the Aggies early in the second quarter. 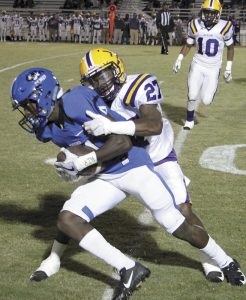 Senior Tyquan Alston attempts to shake a tackle after receiving a pass from quarterback Peyton Stevenson.

But, Jackson was back in business soon following an interception returned to their own 32. On third and long, DHS was called for an unsportsmanlike conduct call for a first down and on the very next play the Aggies connected for a 46-yard touchdown. The point-after was no good, making the score 13-0.

As the half drew to a close, Jackson once again threatened, once again aided by a penalty, this time a pass interference call, setting them up at the 10-yard line. From there, Fred Haywood and Tavian Brown combined for a big sack and that was followed by a penalty against the Aggies. On the final play of the half, Jackson threw into the endzone where the pass was intercepted by Jatorian Jones, keeping the deficit at 13-0.

The Tiger defense helped keep Jackson backed up deep in their own territory for most of the third quarter and it finally paid off. After forcing the Aggies to punt from their own 3-yard line, Keyjun Gracie had a good return all the way back to the 19. Then, Peyton Stevenson hit Tyquan Alston up to the 6-yard line. The Tigers went back to Gracie on a reverse that went into the endzone. Malaki Simpson’s point-after was good making the score 13-7 with 2:25 to go in the third.

Early in the third, the Aggies threatened to increase their lead after a big pass to Nehemiah Pritchett landed at the 2-yard line. From there, the Tigers’ Fred Haywood pressured the quarterback to force an incomplete pass, and two plays later, Alexander Besteder and Avake Jones got in the backfield for a seven yard loss. On third down, the Aggies went to the endzone where Jones came up with his second interception to complete the defensive stand.

With over seven minutes left in the game, the Tiger offense needed to put together a drive, but instead went three-and-out. On the punt, it was Pritchett again who hurt Demopolis, returning it all they way 62 yards to put the game away. A two-point conversion completed the scoring with the Tigers coming up on the short end of a 21-7 score.

The Tigers finish the regular season with an overall record of 8-2. They open the playoffs next week hosting Faith Academy (6-4).

(This article originally appeared in the Saturday, November 3 issue of the Demopolis Times.)