The Demopolis Tigers passed its initial test of this season’s playoff, defeating the Faith Academy Rams, 41-13, and advances to round two next week.

Antonio Besteder led the offensive charge for the Tigers with one of his best nights of the season. 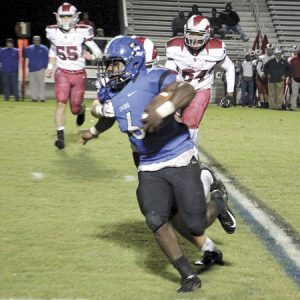 Senior Antonio Besteder had a strong night at runningback, helping lead the Demopolis Tigers to a first round victory over Faith Academy, 41-13.

At first, it was the DHS defense flexing its muscle as it held the Rams on their first possession. After the punt, the Tigers took control on their own 38. Demopolis was committed to the run game, going to Besteder on the first 8 plays of the drive as he gained a total of 43 yards down to the FA 24. Brandon Franklin took a turn on the next two snaps, gaining five yards to the 19. Then the Tigers went to the air as quarterback Peyton Stevenson found Keyjun Gracie who took the ball the rest of the way for the touchdown. Malaki Simpson’s point-after gave the Tigers a 7-0 lead at 5:12 in the first quarter.

The Tiger defense was again stood strong, holding the Rams on a three-and-out.

On the third play of the next drive for the Tigers, Stevenson once again went to the air and hit senior Tyquan Alston who went 49 yards into the endzone. Simpson’s point-after made the score 14-0 late in the first quarter.

Later, in the second quarter, Tiger defense set up the next score for their offense as they backed the Rams up with back-to-back plays in the backfield by A.J. Pruitt and Fred Haywood. The punt was very short, giving the Tigers excellent field position at the 26.

From there, it only took Franklin one play as he hit a hole and went all the way to extend the Tiger lead. The point-after made the score 21-0.

Faith got some offense going on their next possession, catapulted by a 40-yard pass to the 10-yard line. Two plays later they cut into the lead with a 2-yard quarterback sneak. The point-after made the score 21-7 with 3:55 to go.

The following kickoff was fielded at the 20 by Besteder and he found running room, taking it all the way to the endzone, but it was negated by a personal foul. The Tigers would score a few plays later on a screen pass to Gracie, making the score 27-7.

The Rams were held on the final drive of the first half with the help of back-to-back sacks by Haywood and Joel Birl.

The second half got off to a rocky start for the Tigers as a fumbled snap deep in their own territory led to a score for Faith Academy to cut the lead to 27-13.

But the Tigers didn’t wait long to get those points back as they Tigers went 66 yards on only four plays to score. The big play was the last of that drive as Stevenson hit senior tight end  Trey Murdock for a 53-yard touchdown pass. The point-after lifted the Tigers to a 34-13 lead.

Late in the third the Tiger defense would once again set up the offense with good field position as Tyquan Alston picked off a Ram pass and returned it to the FA 15-yard line. On the second play of the fourth quarter, Stevenson hit Franklin from four yards out to push the lead to 41-13, following Simpson’s point-after.

With the victory, the Tigers (9-2) have advanced and will travel to take on Pleasant Grove (9-2) next Friday night.