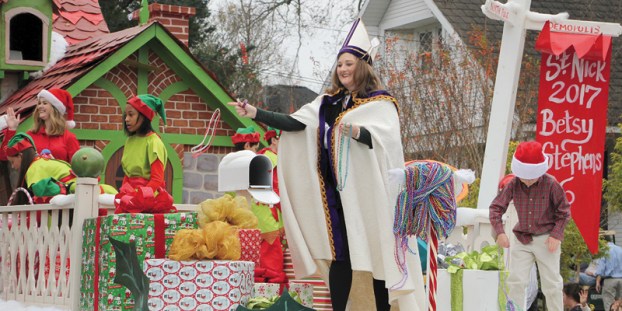 The 2017 St. Nick, Betsy Stephens, rides a float during last year’s COTR Day Parade. In preparing for this year’s event, the Demopolis Area Chamber of Commerce is now taking nominees for this year’s St. Nick as other committees work to prepare for the annual event to be held Saturday, Dec. 1.

Christmas on the River is approaching and will enter full swing on Wednesday, Nov. 28 and last through Saturday, Dec. 1. 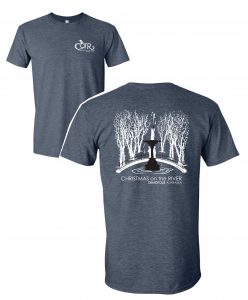 COTR 2018 T-shirts are now available at the Demopolis Area Chamber of
Commerce office.

The festivities will end on Saturday, which will see several classic events take place all over downtown such as the Jingle Bell Run, Fair in the Square, the Day Parade, the Nautical Parade with fireworks following and the Christmas on the River Gala. Events will start as early as 7:30 a.m. A full schedule can be found online at www.demopolischamber.com/christmas-on-the-river.

Groove Factor will be the musical entertainment at the COTR Dance, playing “‘70s and ‘80s Motown” music according to Sidney Freeman, Demopolis Area Chamber of Commerce executive director.

Throughout the four-day occasion, other community organizations will host related events such as Christmas in the Canebrake from the Marengo County Historical Society and the Alabama State Championship BBQ Cook-off.

“We definitely want to include things that are relevant to the weekend,” Freeman said of the extra community events throughout COTR.

New to this year will be the Mascot Fun Run, which will take place immediately prior to the 9 a.m. Jingle Bell Run during registration.

The Demopolis High School Tiger, the COTR elf and snowman, Buddy the Beaver and others wearing paper-maché heads will run the first block of the course as entertainment while the Jingle Bell Run participants wait for their race to start.

“We just wanted to change it up a bit and make it a little fun this year,” Freeman said.

She also said that Fair in the Square will be packed with vendors featuring woodworking pieces, crafts, face painting and everything in between.

“I think it’s going to be a really big turnout. All of our booth spaces are sold out.”

Freeman expressed excitement about the Day Parade, which she said will feature new floats and will host all Marengo County Sports Hall of Fame members as the Grand Marshalls to honor the hall of fame’s tenth anniversary.

Despite this being Freeman’s first year as chamber director, this isn’t her first COTR. She said she has participated in the festivities for years, but it’s “eye-opening” to work on it behind the scenes.

“As a spectator you really have no idea about the manpower that goes into it,” she said.

As such, Freeman thanked this year’s COTR Chair Jennifer Roemen, who she said “has worked tirelessly” and all the volunteers that have helped thus far because COTR “would not happen without volunteers.”

Volunteers are still welcome for this year’s COTR, especially for the Nautical Parade. Anyone interested can contact the chamber at 334-289-0270 to find their place. The chamber is also still accepting signed St. Nick nominations until Nov. 15.

(This article originally appeared in the Wednesday, November 7 issue of the Demopolis Times.)

The City of Linden of hosted a Veterans Day Parade and Ceremony Friday. The event involved participation from several area... read more