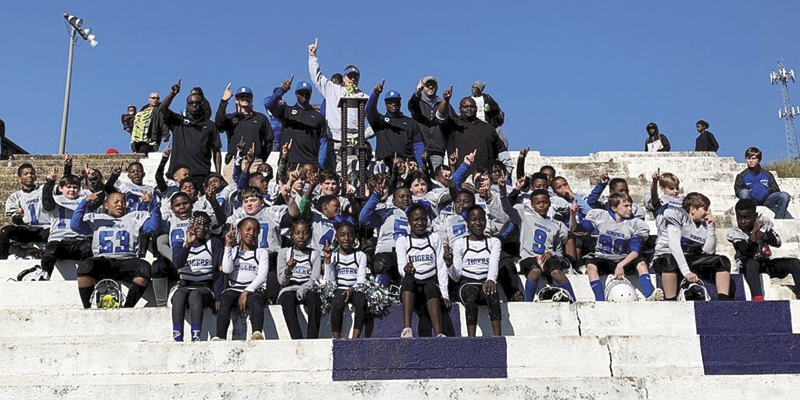 On Saturday, Nov. 10, the 9- and 10-year-olds Demopolis Tigers played Tuscaloosa County of Northport for the State Championship of the West Alabama Youth Football Association League (WAYFA).

Both teams came into the game with perfect 12-0 record and the stage was set for an unbelievable matchup. The Wildcats of Northport had only allowed two touchdowns all year coming into the game and they had scored at least 28 points against each team they had faced.

The Wildcats received the opening kickoff and went to work quickly. From the first play of scrimmage, quarterback Kamory Jackson took the snap and ran around the left end for 45 yards to the Demopolis 15-yard line. The Tigers’ defense, led by Defensive Coordinator Jerry Conwell and Coach Jimmy Davis, would go to work there and make a huge stand in the red zone, with several big plays, especially a huge lick on the Wildcat QB by linebacker Bryant Deas.

The Tigers took over from there on  the 11-yard line. Demopolis picked up a big first down on back-to-back power runs by JaKohri “Hammer” Johnson. Then with first and 10, Jayden Smith ran off the blocks of Hunter Lolley and Kaleb Branch, right off-tackle to the left side, for a huge 76-yard touchdown scamper. Following that huge run, Tiger quarterback J.W. McAlpine rolled out to his right and hit a wide open Fred Aldridge for a two-point conversion, giving the Tigers an 8-0 lead with 2 minutes left in the first quarter.

After a failed onsides kick attempt by the Tigers, The Wildcats went to work from their own 47. Their quarterback went straight to the air, with a long pass down the left sidelines, but it was picked off in amazing fashion by safety Fred Aldridge, who came all the way across the field and went up over the receiver for a huge interception, giving Demopolis the ball at their own 28.

The Tigers popped the Wildcats right in the mouth with big runs between the tackles by both “Hammer” Johnson, with runs of 6, 8, and 3 yards, and Bo Davis with runs of 11, 8, and a huge run of 25 yards that would end up being stripped before the whistle blew. The Wildcats took over early in the second, from their on 11-yard line, but that would end quickly, when a big hit from Bryant Deas and Bo Davis would lead to a fumble recovery by Javonté Johnson.

The Tigers went right back to work from the Wildcat 12-yard line, with a touchdown run to the outside by Jayden Smith. However, there was a holding call on the play, that would wipe the score away and back the Tigers up. The Wildcats managed to make a defensive stand on the drive, with the help of several Tiger penalties, and they took over on downs at their on 2-yard line. The Tigers, however, would answer back with big defensive plays by Emonte Charleston, Hammer, and Bo Davis, to force the Wildcats to punt.

The Tigers went to work again in Wildcat territory after the punt, from the 45 yard line. Bo Davis went right up the gut for 10 yards behind Nehemiah Howard, Ka’Vion Rowser, and Javonté Johnson. The Tigers then went to the air with J.W. McAlpine hitting a wide open Kaleb Branch for a 35-yard touchdown pass. The Tigers extra point attempt failed, but they now lead 14-0, with less than 2 minutes before the half. The Wilcats would make a valiant effort to score before half, but several big plays from Bo Davis, Bryant Deas, Ka’Vion Rowser, and several other Tigers would keep them scoreless through the half.

The Tigers took over after halftime and went to work running the ball behind the strong offensive line that has carried them all season, which includes: Nehemiah Howard, Javonte’ Johnson, Ka’Vion Rowser, Bryant Deas, Skeeter Capps, Hunter Lolley, and Kaleb Branch.

“These boys up front are what makes this team so good,” said Head Coach Jim McAlpine. “I’m not taking anything away from our backs, but most ball games are won up front in the trenches, on both sides of the ball.”

Two back-to-back big runs by Bo Davis for 8 yards each, a 10-yard run by Jayden “Bug” Smith, and a QB draw by McAlpine for 7, would have the Tigers knocking on the door, but a fumble deep in the Wildcat redzone would turn the ball over again.

The Wildcats would then try to run to the outside edge on three consecutive plays, but big tackles by McAlpine, Charleston, and Davis forced a fourth-and-long situation. The Wildcats would choose to go for it, throwing the ball deep down the left side and almost picked off by another Demopolis safety, Cayden Sanders.

The Tigers took over from there and drove the ball all the way to the Wildcat 10, with several big runs by JaKohri’ “Hammer” Johnson, before being denied another score.

Another big Tiger defensive stand would give them the ball back later in third quarter from the Wildcat 32-yard line. An 11-yard run by Jayden “Bug” Smith, and a  QB draw by McAlpine for six yards, would set the Tigers up at the 15. On second down and four, “Bug” Smith would rumble for the last and final Tiger touchdown. Then Tigers were successful on their extra-point attempt, with McAlpine taking the snap right up the gut.

With lots of younger Tigers in the game the Wildcats would make once last big drive, but it ended when Emonté Charleston hit the QB hard on the outside edge, and forced a fumble that was recovered by Bryant Deas. The Tigers would go on to win the State Championship 21-0, and finish the season a perfect 13-0.