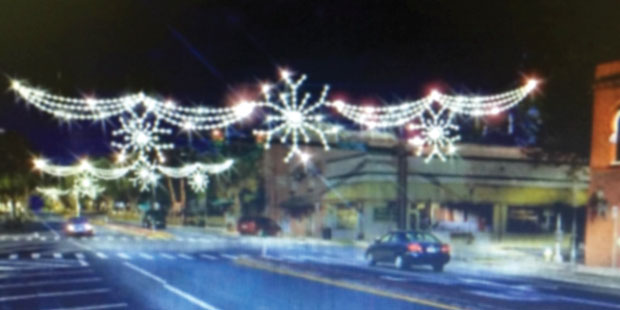 An example of the Snowflake Skyline decorations that will light up Demopolis this Christmas season.

Demopolis will be lit up with new Christmas decorations this year with the Public Works Department taking a mix of old and new materials to create a Snowflake Skyline that will appear downtown. Highway 80 and other areas of Demopolis will also see new decorations put up.

According to Kay Evans, chairperson of the Beautification Committee, Mayor John Laney was the first to suggest that the city display something different this year.

“The mayor last year asked the Beautification Committee to come up with new decorations for downtown,” she said.

After researching their options, Public Works Superintendent Barbara Blevins found a way to create their own. They purchased new white lights to accompany the skyline and asked local businesses to sponsor the creation.

Evans said that 10 so far have become sponsors and that each one will have a custom-made sign placed in front of the sponsoring business’s storefront. She described the signs as classic Christmas sculptures and greenery bearing a Merry Christmas message from the business.

“It’s going to pay for the new lighting, new bulbs and whatever materials it’s taking to create the new snowflakes,” she said of the sponsorships.

The skyline will replace the area’s old decorations, which Evans said were various Christmas signatures, such as candy canes or reindeer, decorating the lampposts. She also said the snowflakes and white lights of the skyline will be the overall theme of the new decorations across Demopolis.

With so many people visiting the city to celebrate Christmas on the River, Evans said there was a simple goal to achieve with the Snowflake Skyline.

“The main gist of this is we want to revitalize our downtown.”